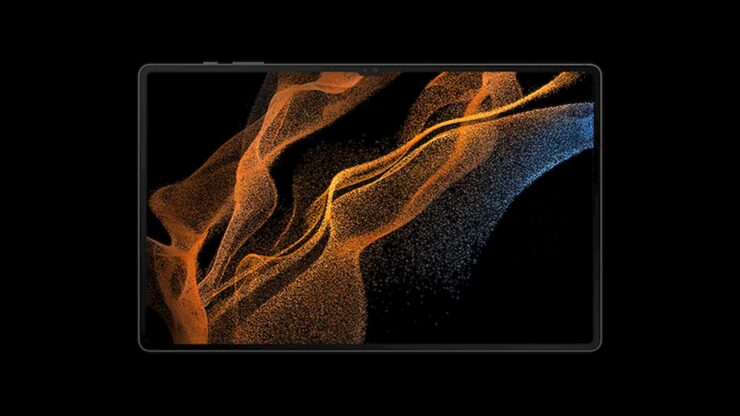 Several reports have consistently said that Samsung aims to launch the Galaxy Tab S8 Ultra, which will likely serve as the direct competitor to Apple’s iPad Pro, and it will have a display size to match. However, with the increase in screen size, also comes a notable design change, and according to the latest leaked renders, Samsung’s top-tier slate will feature a notch.

Introduction of the Notch Could Be a Deliberate Change to Allow the Galaxy Tab S8 Ultra to Feature Two Front-Facing Cameras; Remaining Modes to Arrive With Regular-Shaped Bezels

It is strange that the same sensor on top of the Galaxy Tab S8 Plus is not present on the Galaxy Tab S8 Ultra, but it is possible that the latter has that capability embedded in that dual camera setup. Unfortunately, the exact nature of these cameras has not been detailed by Evleaks, but we are sure to find out during the start of next year, which is not too far off.

Another thing that we noticed from the renders was that the volume rocker and power button are present on the same side. As for the hardware specifications, the Galaxy Tab S8 Ultra could feature one of the biggest batteries for a tablet, with a previous rumor stating it would house a 11,500mAh cell. It may also tout a 14.6-inch screen, meaning that Samsung has landed in laptop territory, which would also explain how the company would be able to squeeze a battery of this size.

The large capacity may also offset the battery guzzling properties of both the 120Hz and 5G options when enabled, so at a first glance, the Galaxy Tab S8 Ultra certainly means business if you take into account that it could be a worthy iPad Pro competitor, but that would also mean it will come with a matching price tag. Did you appreciate the design of Samsung’s upcoming high-end tablets, or were you looking for something better? Tell us down in the comments.

The post Galaxy Tab S8 Ultra, Samsung’s Upcoming Flagship Tablet, to Feature a Notch, According to the Latest Renders by Omar Sohail appeared first on Wccftech.