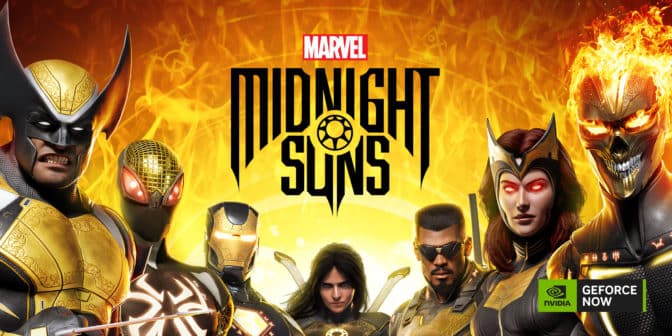 It’s a new month, which means GeForce NOW’s got the list of 22 new games arriving in December.

Then get ready to move out, members. Battlefield 2042 is the latest game from the Electronic Arts catalog streaming on GeForce NOW. It arrives just in time for the free access weekend, running Dec. 1-4, and comes with a members-only reward.

These games lead the charge, among the six additions streaming this week.

From the creators of XCOM, and published by 2K Games, Marvel’s Midnight Suns is a tactical role-playing game set in the darker, supernatural side of the Marvel Universe. It launches on Steam on Friday, Dec. 2, with GeForce NOW members getting into the action later this month.

Play as “The Hunter,” a legendary demon slayer with a mysterious past and the first-ever customizable superhero in the Marvel Universe. Put together a team of legendary Marvel heroes, including Scarlet Witch, Spiderman, Wolverine, Blade and Captain America.

These heroes must fight together to stop the Mother of Demons from completing an ancient prophecy. In revolutionary card-based tactical battles, players can use ability cards on enemies, themselves or the environment.

Stay tuned for updates on the game’s release on GeForce NOW.

Step Foot Onto the Battlefield

Prepare to charge into Battlefield 2042, the first-person shooter that marks the return to the iconic all-out warfare of the widely popular franchise from Electronic Arts. Available today along with the latest update, “Season 3: Escalation,” the game marks the 19th title from EA to join GeForce NOW.

Adapt and overcome in a near-future world transformed by disorder. Choose your role on the battlefield with class specialists and form a squad to bring a cutting-edge arsenal into dynamically changing battlegrounds of unprecedented scale and epic destruction.

With RTX ON, EA and DICE introduced ray-traced ambient occlusion in Battlefield 2042. This accurately adds shadows where game elements occlude light, whether between a soldier and a wall, a tank and the tarmac, or foliage and the ground. Members can use NVIDIA DLSS to get the definitive PC experience, with maxed-out graphics, high frame rates and uncompromised image quality.

The game comes with a special reward for GeForce NOW members. To opt in and receive rewards, log in to your NVIDIA account and select “GEFORCE NOW” from the header, then scroll down to “REWARDS” and click the “UPDATE REWARDS SETTINGS” button. Check the box in the dialogue window that shows up to start receiving special offers and in-game goodies.

Experience the action across compatible devices and take gaming to the max with all the perks of an RTX 3080 membership, like 4K resolution, RTX ON and maximized gaming sessions.

The More the Merrier

Members can look for the following six games available to play this week:

Then time to unwrap the rest of the list of 22 games coming this month:

Nothing Left Behind From November

On top of the 26 games announced in November, members can play the extra 10 games that were added to GeForce NOW last month:

And good things come in small packages — for the perfect stocking stuffer or last-minute gift, look no further than GeForce NOW. Physical or digital gift cards are always available, and tomorrow is the last day to get in on the “Green Thursday Black Friday” deal.

Before you start off a super weekend of gaming, there’s only one choice left to make. Let us know your pick on Twitter or in the comments below.

You’re becoming a super hero but can only pick one of the super powers below. Which do you choose?