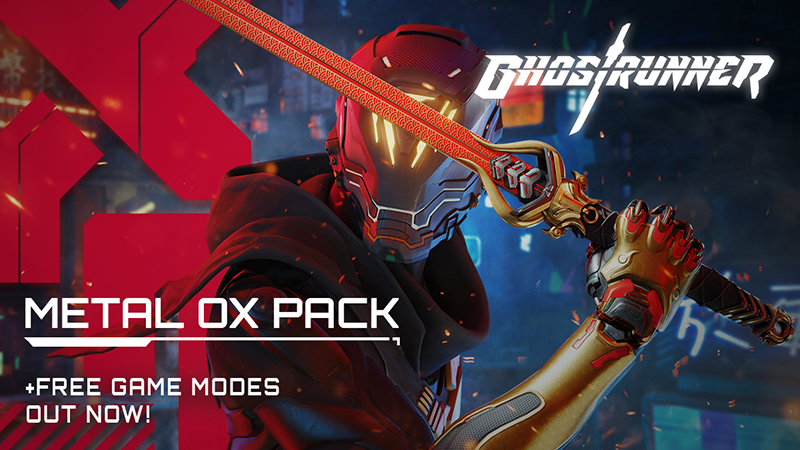 505 Games and All in! Games, have released some new free content and paid DLC for their first-person action-platformer, Ghostrunner.

The free update includes the addition of two new modes: Photo and Kill Run. Photo Mode allows you to more easily capture and share gorgeous screenshots of the game, while the Kill Run Mode is focused on speedrunning. This mode is based around a timer, and players get extra seconds each time they kill an enemy. Compete to finish each level with the best time.

The update also adds some performance enhancements. This includes support for NVIDIA Reflex on PC, while the PS4 Pro version gets an adjustable FOV slider, and a new Performance Mode that allows players to tweak the graphics options to get higher framerates.

These updates were released alongside the Metal Ox Pack DLC. This cosmetic DLC adds the Benevolence, Justice, Integrity, and Rite katana and glove sets. The DLC pack costs $4.99 USD.

You can find the trailer showcasing the new updates and DLC below.

You can find the rundown (via GamersGate) below:

Ghostrunner is a hardcore FPP slasher packed with lightning-fast action, set in a grim, cyberpunk megastructure. Climb Dharma Tower, humanity’s last shelter, after a world-ending cataclysm. Make your way up from the bottom to the top, confront the tyrannical Keymaster, and take your revenge.

The streets of this tower city are full of violence. Mara the Keymaster rules with an iron fist and little regard for human life.

As resources diminish, the strong prey on the weak and chaos threatens to consume what little order remains. The decisive last stand is coming. A final attempt to set things right before mankind goes over the edge of extinction.

As the most advanced blade fighter ever created, you’re always outnumbered but never outclassed. Slice your enemies with a monomolecular katana, dodge bullets with your superhuman reflexes, and employ a variety of specialized techniques to prevail.

One-hit one-kill mechanics make combat fast and intense. Use your superior mobility (and frequent checkpoints!) to engage in a never-ending dance with death fearlessly.

Ghostrunner offers a unique single-player experience: fast-paced, violent combat, and an original setting that blends science fiction with post-apocalyptic themes. It tells the story of a world that has already ended and its inhabitants who fight to survive.

Ghostrunner is available on Windows PC (via the Epic Games Store, GamersGate, GOG, and Steam), Nintendo Switch, PlayStation 4, and Xbox One, with PlayStation 5 and Xbox One versions coming later in 2021. There will also be a physical version released for Nintendo Switch on June 25th in Europe, and June 29th in the US.