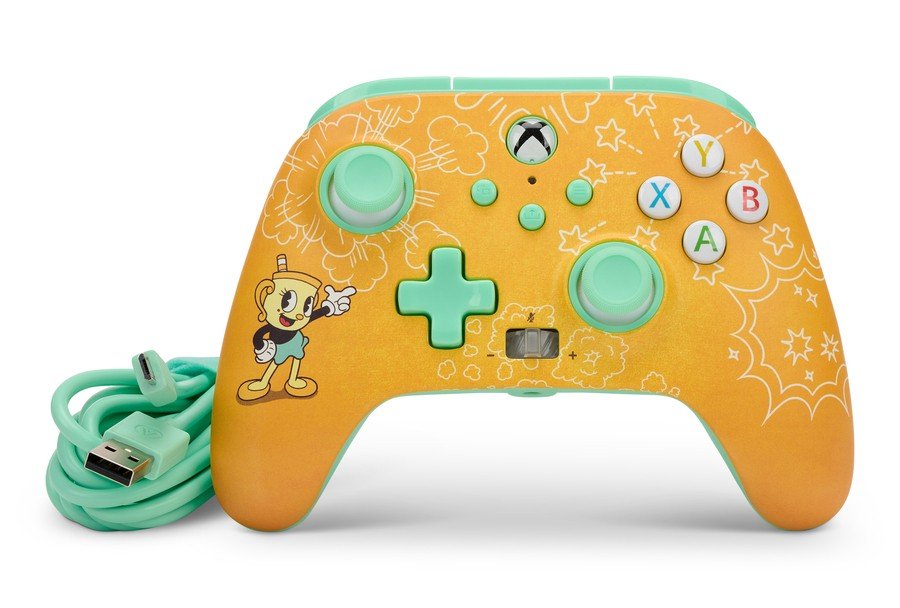 We’ve tried quite a few third party pads during the Xbox One and Series X|S era, but fully licensed game-themed efforts are fairly rare. That’s why when the opportunity to take a look at PowerA’s latest Cuphead controller came up (the second of its kind), we jumped at the chance to try it out.

Adorned with an all-over Cuphead design featuring Ms. Chalice, this is a rather good looking pad when all’s said and done. It really does fit with the game’s aesthetic quite nicely, and the front plate’s matte finish feels nice in the hand during long gaming sessions. If the design stands the test of time (and sweat) — which we’ve no reason to doubt — this one will remain a good looking controller.

As for how the controller performs, it’s another version of the PowerA Enhanced Wired Controller that’s been around for a few years now. Yes, it’s wired, but it has all the other features you’d expect from an Xbox Series X|S pad, like rumble motors, a share button and even two re-mappable buttons on the rear giving this one a feature typically found on high-end pads, like the Xbox Elite Controller.

In-game, it feels great to use in most scenarios. The vibration effect is solid if a little overbearing depending on the game, and the bumper/trigger design is nice, working well with racers and shooters alike. It doesn’t rattle around and make tons of noise like some third-party controllers do, which we very much welcome, and all in all, gameplay feels great with the PowerA Enhanced Controller, minus the slightly mushy D-Pad which is trumped by Xbox’s own clickier design.

However, even if rattling is kept to a minimum, the PowerA pad does feel a little cheap in the hand. Part of that is down to the lack of weight as a result of it being wired, but the plastics on the rear do feel a bit cheap and nasty, which is something third-party controllers often struggle to get away from. Sure it’s only $40 for an official Cuphead design featuring extra buttons, but we’d be happy to pay another $10, $20 for PowerA to use some higher quality materials here.

And then there’s the elephant in the room: this is yet another wired third-party controller. Xbox doesn’t appear to allow any wireless third party pads that aren’t based on its own controller design (like SCUF controllers or those custom Razer efforts). We’re not sure why this is the case, as more officially licensed wireless options would be great, especially in the midst of an official controller shortage.

All in all, the PowerA Ms. Chalice Cuphead Controller is a solid option, and we certainly recommend it as a backup, especially if the design is your kinda thing. If you’re not a big fan of the design, PowerA has plenty of other options for you to choose from, including a visually pleasing set of spring-themed designs. While the controller itself certainly doesn’t knock any official effort off its perch, the Cuphead theme is beautiful, and the PowerA Enhanced Controller is a solid one, even if we’d prefer it to be wireless, featuring some higher quality materials.

Have you picked up a PowerA controller lately? Let us know down in the comments section below.