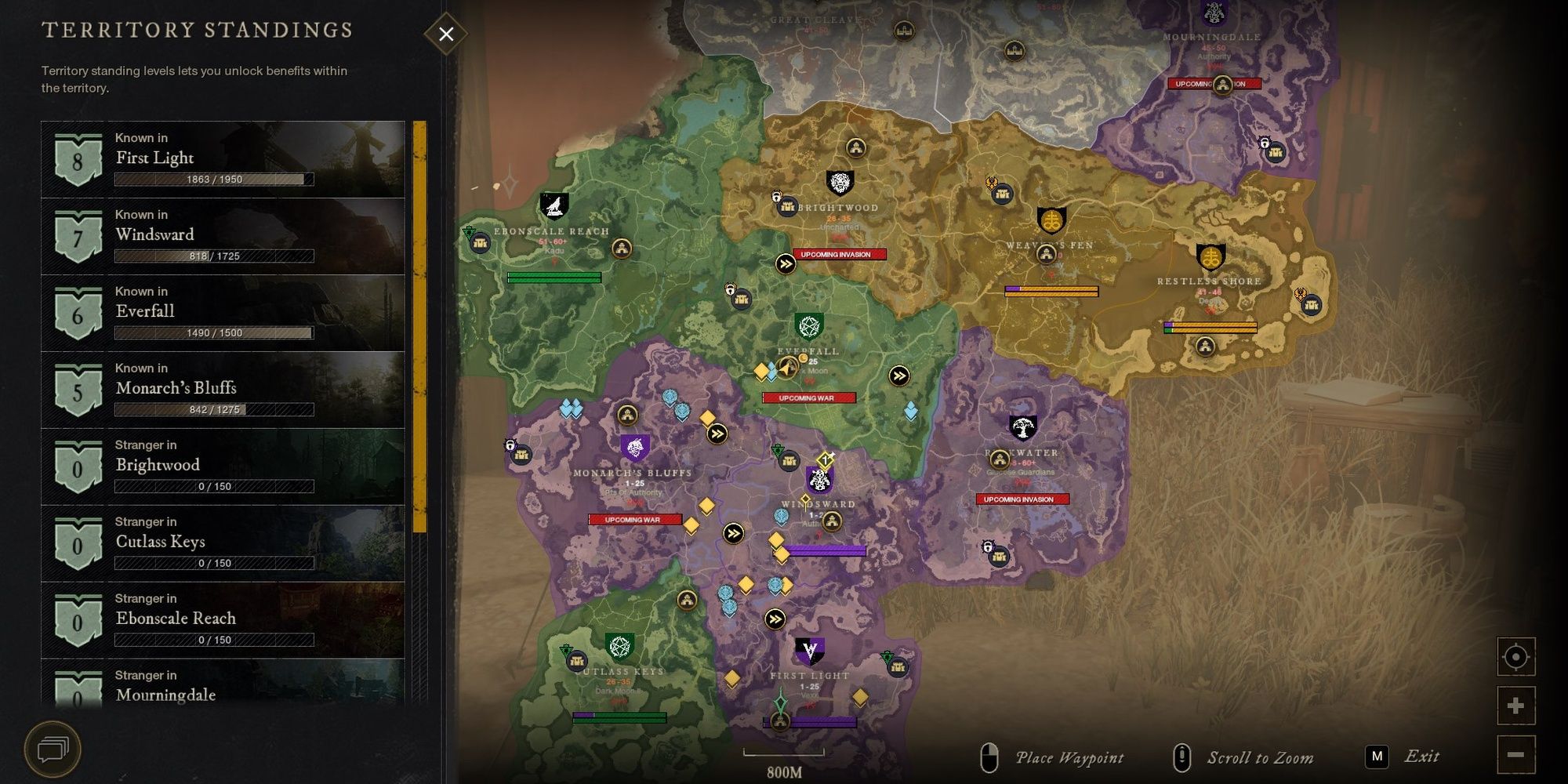 Territory Standing is one of New World’s many progression systems. As you earn XP in a region, you’ll increase your reputation with that region. Increasing your reputation will unlock passive rewards while in that region, most of which are quality of life improvements.

Since each region has its own reputation, you’ll want to focus on certain rewards for each region to maximize farming strategies. And since you can’t refund these rewards, you’ll want to be especially careful with which options you pick. We’ll be going over what Territory Standing is, how you can increase it, every reward tied to this system, and rewards you want to grab or avoid.

What Is Territory Standing?

Territory Standing is a progression system that gives you passive bonuses as you complete activities in a certain region. Similar to Weapon Mastery, this rank differs for each zone and is increased by earning XP in that zone.

Related: New World: How To Get More Fae Iron

When you increase your standing in a territory by one rank, you’ll be given a choice between one of three (sometimes four) passives that will affect your character while in that zone. These benefits range from additional storage space to increased XP gains. Each zone has a standing cap of 300. You can’t change your territory rewards once they’re redeemed, so choose carefully.

How To Increase Your Territory Standing

Increasing your Territory Standing is simple: earn XP. Any XP you earn will increase your standing with that region. Once you earn enough XP, you’ll gain a Territory Standing rank, allowing you to redeem a reward. XP farming tips work well here. Completing quests, closing Corruption Breaches, and crafting will all help with gaining Territory Standing as fast as possible.

If you want some specific XP tips, check out our leveling tips article and best leveling build guide.

Once you’ve gained a Territory Standing rank, head to your map menu to claim your reward. The game will give you one of three (sometimes four) cards you can choose, each pulled from a pool of ten potential rewards. Below is a table of every reward you can receive from this system. Unless otherwise noted, all of these rewards experience diminishing returns when redeemed multiple times.

You want to grab the Storage card whenever it appears, as it’s the only Territory Standing reward in New World that doesn’t suffer from diminishing returns. Storage is a precious commodity when you start engaging with New World’s endgame crafting, so you’ll want a massive storage capacity in every settlement. Your next best pick is Trading Tax, as most Companies get their income by taxing the auction house. Redeeming the Trading Tax reward a few times will save you an immense amount of Coin in the long run.

As for other good options, you’ll want to invest in whatever you’ll be doing the most in that region. Do you trade a lot in WIndsward? Invest in lowering your tax rates. Do you farm resources in Brightwood? Invest in Gathering rewards. Regardless of your strategy, remember that most cards suffer from diminishing rewards.

By far the worst card you can grab is XP Gain. Never take it. You’ll be getting most of your XP from quests, most of which require you to head to another zone. You won’t be leveling in the same zone from 1-60, so the XP Gain reward serves little purpose. And once you reach the level cap of 60, this card will no longer do anything for you.