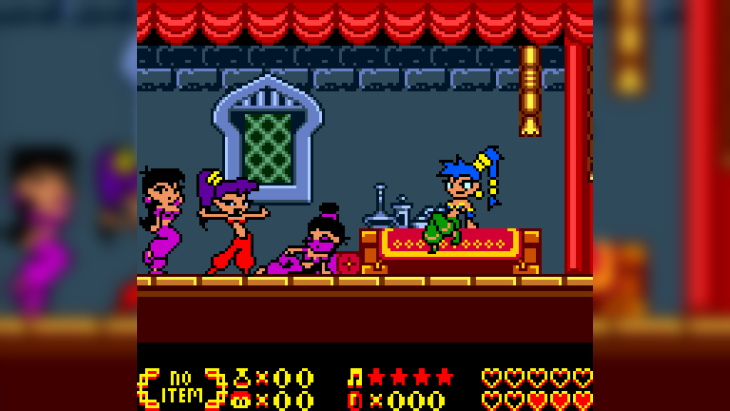 Wayforward have announced the launch of Shantae digitally on Nintendo Switch, completing the entire series on the platform.

The game originally launched in 2002 on the Game Boy Color, but did not have a second print run after around 20,000 copies were sold. Despite Capcom not publishing the game for eight months (launching when the Game Boy Advance had been around for a year), Director Matt Bozon blamed his own naivity; a combination of the game selling well purely on it being good, and how it was “too sexy to be a kid’s brand, and too girly for a male gamer brand.”

Despite this, the game was highly praised by critics and would gain a cult following. As such it would become something of a collector’s item. Kotaku reported around 2020 that the mere cart was selling for $530 USD, while a sealed and graded complete box would sell for $10,000 USD. GameValueNow currently price the game at around $2,300 USD.

Limited Run Games would release (as their name states) limited physical run of Shantae in September 2020. Now, Wayforward have announced the game is available digitally, and as such the entire Shantae series is now available on Nintendo Switch.

The game itself centers on the titular Shantae, a Half-Genie and defender of Scuttle Town. After the pirate Risky Boots and her Tinkerbats steal an experimental steam engine, Shantae must gather the elemental stone across Sequin Land to prevent her using them in conjunction to make a terrible weapon.

Shantae can whip her foes with her long hair, and use magic to turn into animals to thwart foes and solve puzzles. This version features the ability to switch between the Game Boy Color and Game Boy Advanced-enhanced modes (with a bonus Tinkerbat transformation), save states, multiple display options, improved controls, and an art gallery.

You can find the announcement via the Half-Genie History trailer below (showcasing other games in the Shantae series).

The original Shantae adventure returns! First released in 2002, Shantae is the classic action-adventure-platformer that introduced players to the fan-favorite Half-Genie heroine. In her debut title, Shantae hair-whips, dances, and transforms as she seeks out four elemental stones hidden throughout Sequin Land to put a stop to the nefarious lady pirate, Risky Boots. During her quest, she’ll explore treacherous labyrinths, gain amazing new powers, conquer mini-games, and meet up with friends such as Bolo, Sky, and Rottytops! This version of the game includes both the standard Game Boy™ Color mode and the Game Boy™ Advance-enhanced mode!

-Use dance magic to transform into a monkey, an elephant, a spider, and more!

-Travel across Sequin Land, from forests and deserts to swamps and frigid peaks!

-Buy a variety of items and upgrades to gain new abilities!

-Environments change from day to night!