The blue blur is back and this time he’s looking to go even faster! Paramount Pictures was keen on seeing Sonic the Hedgehog return to theatres after the first film went above and beyond expectations. It shouldn’t be a surprise then that the sequel delivers more of the same but it’s a blast to watch and even more so now that Sonic the Hedgehog 2 is available at home.

In April, Paramount and Sega revealed Sonic the Hedgehog 2 grossed over $150 million domestically, going on to be the highest-grossing video game movie of all time in the US. The film has gone on to gross over $375 million globally.

As a video game adaptation, it’s very middle of the road and in no way is that a bad thing. Sonic has found a family and even moonlights as a hero at night (even if he sometimes misses the mark). Being left alone for the weekend, Sonic’s carefree routine is quickly put to bed after Dr. Robotnik returns to enact his revenge by bringing along Knuckles as a contingency plan. Knuckles makes quick work of Sonic and becomes a breakout supporting character thanks to Idris Elba’s performance.

Tails was teased at the end of Sonic the Hedgehog so it’s nice to see Colleen O’Shaughnessy return to the role she populates in the video games. However, as much as I enjoy seeing Knuckles and Tails make their big screen debut, nothing compares to Jim Carrey’s Dr. Robotnik – a character that commands your attention whenever he is on the screen. His chaotic energy and presence are easily the highlight for me. 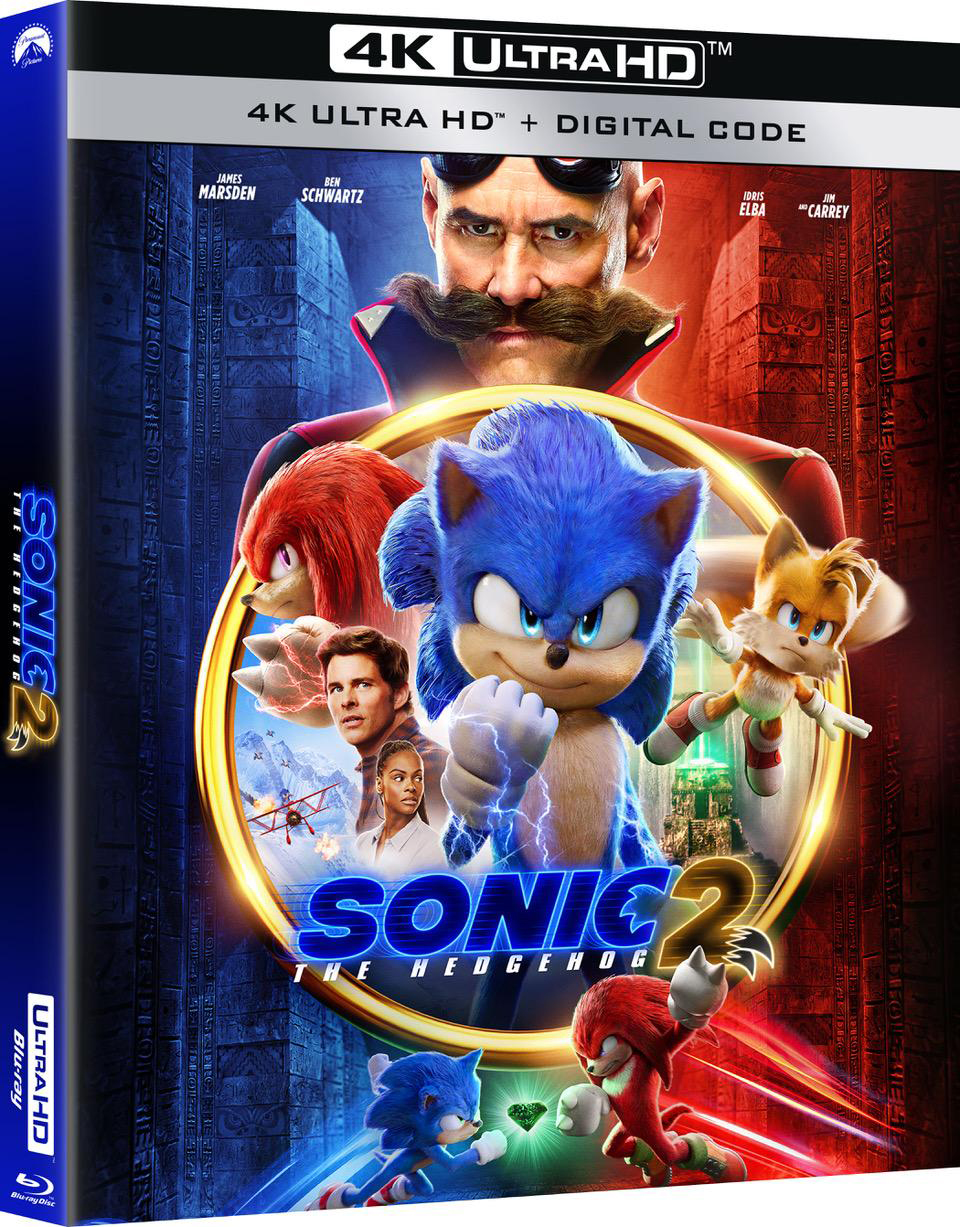 Paramount has launched the Sonic the Hedgehog 2 Ultra HD Blu-Ray in stores finally, coming in with an impressive 4K picture that shines thanks to Dolby Vision HDR. The colours alone pop on my screen and it’s largely in part to the gamut of colours physical media often offers (the likes of which streaming continues to struggle with). Whether it is Tails, Knuckles, or Sonic, the level of detail found on each character is immediately noticeable and this is bolstered by Dolby Vision.

As an extra treat, Sonic the Hedgehog 2 boasts some incredibly special features including an excellent audio commentary with Director Jeff Fowler and actor Ben Schwartz. I’ve always enjoyed hearing how the sausage is made when it comes to film and learning how both Fowler and Schwartz appreciate video games, how important these characters are to them, and the shenanigan on set is such a blast.

Furthermore, there is a new animated short called Sonic Drone Home you’ll want to check out – it is short and sweet and takes place right after the film. Sonic, Tails, and Knuckles are working on returning books to the local library but are quickly sent on a detour to the local junkyard.

There are also several deleted scenes to check out that add an additional 25-30 minutes of screentime. Sadly though, you can tell they don’t add anything to the overall plot of the film so you can even skip these if you choose to do so. I think they are easily worth checking out if you’re craving more Sonic content now that we know the next film isn’t launching until 2024.

Between the Kid Cudi music video for Stars in the Sky, the character breakdown of Knuckles with Idris Elba, hearing the cast and crew discuss the sequel and what it means to be back working on a second film, there’s a lot of extra content that’ll keep you in your chair well past the movie’s run-time.

All in all, I’m impressed with the Sonic the Hedgehog 2 Ultra HD Blu-Ray. The movie itself is an excellent follow-up to the original and is packed with charisma, humour, and heart.