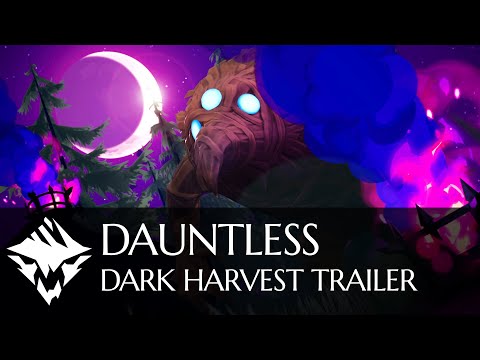 As is tradition with many live-service style games, Halloween events are to be expected. A recent contender in the who-can-spook-their-players-the-best competition is Phoenix Labs’ Dauntless, unveiling this year’s “Dark Harvest” event – entitled “The Unseen Arising”. Described in a blog post as “eleven days of perpetual darkness”, a swarm of secretive cultists (named the “Unseen”, hence the event name) make their presence known with hidden gifts and messages scattered around the game (on top of all the “spooky” visuals you’d expect from an event like this).

The update contains a selection of thematic missions, new & returning items, and on the 28th of this month, a “blood-curdling” fight against a new Dire Behemoth.

The messages include things like “They are not pure Our origins are” and “We move among the shadows, but we are growing in strength year over year. Join us.” No doubt that these are messages from the Unseen cult, since they’ve had a role to play in Dark Harvest events since 2018 – and they’ve got a history of doing this kind of stuff. We should see more of them as we approach the coming battle against that mysterious Dire Behemoth, but only time will tell if those plans will reach their apex.