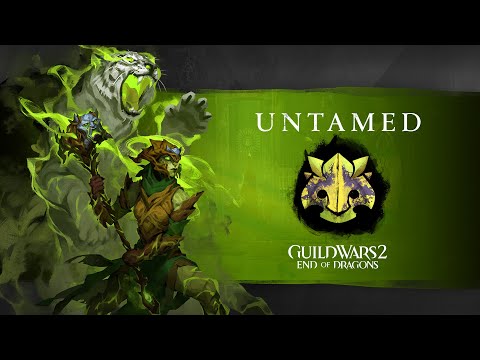 ArenaNet’s Guild Wars 2 is a successful MMORPG that first released in 2012 and has had consistent updates since then and the company announced its upcoming expansion, End of Dragons, some time ago. Over the past few months, ArenaNet have continued to release details about the expansion, including new elite specializations. Today, via a trailer, the Untamed Elite Specializations for the Ranger was showcased, giving fans a first look at the skills and abilities available for the specialization. Guild Wars 2’s core version is currently free to play, with a ton of content for gamers to enjoy.

The Untamed have learnt to harness the ancient power found in Echovald and can channel them through their pets. The duo wreaks havoc on enemies as the hammer leaves enemies daze while pets utilize their primal energy to deal damage. The power switches between the player and animal companion, allowing for greater hits on different occasions and ultimate killing blows.

An Elite Specialization changes the way a profession is played as it alters the base mechanic and introduces a new weapon, elite skill, and healing skill as well as a utility skill of the same type. Elite Specializations allow players to set themselves apart on the battlefield and truly feel unique in their style of play.

Other Elite Specializations that have been showcased thus far include the Catalyst and the Bladesworn.

ArenaNet recently showcased Canthan, a new location that will feature heavily in the upcoming expansion, End of Dragons. Canthan features Asian-themed bridges, temples and pagodas while its environment is filled with lush vegetation. Guild Wars 2: End of Dragons is the game’s third expansion and is set to release in February 2022.

What are your thoughts on Guild Wars 2? Have you ever tried it? Are you interested in the third expansion? Let us know in the comments below or on Twitter and Facebook.