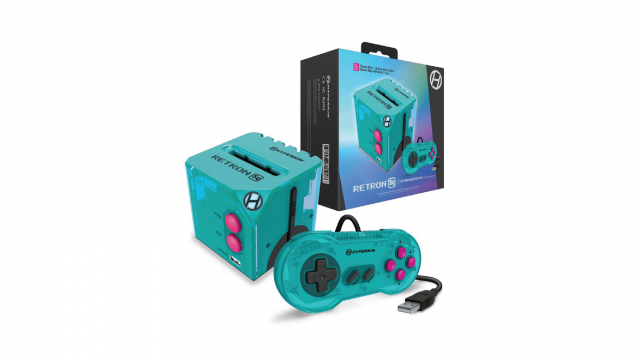 If there’s one undeniable fact about retro gaming, it’s that hardware breaks down over time. It doesn’t matter the system in question, the manufacturer, or how careful the owner is with preserving the device—as the years march along, eventually a console will be rendered unplayable. This is exacerbated by the introduction of new types of televisions. Many of today’s flat panel TVs lack the inputs needed to even connect a retro system, at least without the addition of converters or other components. Even then, usability is spotty, if not outright hobbled by a variety of different compatibility issues.

In the case of Nintendo’s Game Boy lineup, the handhelds are notorious for a number of different deficiencies and maladies that spring up and render them unusable. This makes playing Nintendo’s rich history of portable games arguably more challenging than it is to experience software that requires hardware that connects to an external screen. With Game Boys, everything is built into a single unit; if one element breaks down, the entire shebang is rendered inert. For those who have a multitude of Game Boy cartridges laying around with no means of playing them, Hyperkin has entered the fray with something to help work around the need for a Game Boy: meet the RetroN Sq.

The RetroN Hq is a diminutive cube-shaped console that is roughly the size of an upright Kleenex tissue box, if not a bit smaller. There are two colorways that can be had: Black & Gold and Hyper Beach, the latter being a turquoise color with pink buttons. The device looks wonderful, especially the Hyper Beach colorway that screams ’90s and early 2000s tech. Each RetroN Sq comes with the console, a 10″ wired Scout Controller (which closely resembles an SNES pad), a 3″ HDMI cable, a 6″ USB-C power cable, an AC adapter, and a 512 MB microSD card. Via its HDMI cable the RetroN Sq can render games in 720p HD. Players can opt to display games in a 4:3 aspect ratio (which is the native ratio of a Game Boy Screen) or 16:9 (which stretches the picture to fill the screen but looks terrible, in my opinion). Overall, a lot comes in the box and ensures that players will be able to get right to playing almost the second they’ve connected their RetroN Sq.

The RetroN Sq is a godsend for retro gamers with a ton of Game Boy (GB), Game Boy Color (GBC), and Game Boy Advance (GBA) cartridges, of which it can play all three. Admittedly, there are some limitations in terms of which games the RetroN Sq can handle. Anything with a gyro sensor—like WarioWare: Twisted! or Kirby Tilt ‘n’ Tumble, for instance—isn’t going to work without awkwardly trying to manipulate the console while simultaneously holding the controller. Other than that, the bulk of the entire Game Boy library is there for the playing. At least least in theory, but we’ll get to that in a bit. For those without physical Game Boy games the RetroN Sq will be useless. The device isn’t meant to play anything other than the real-deal cartridges, which might be prohibitive for some. That said, there is a ready supply of Game Boy games still out in the wild for those willing to search. 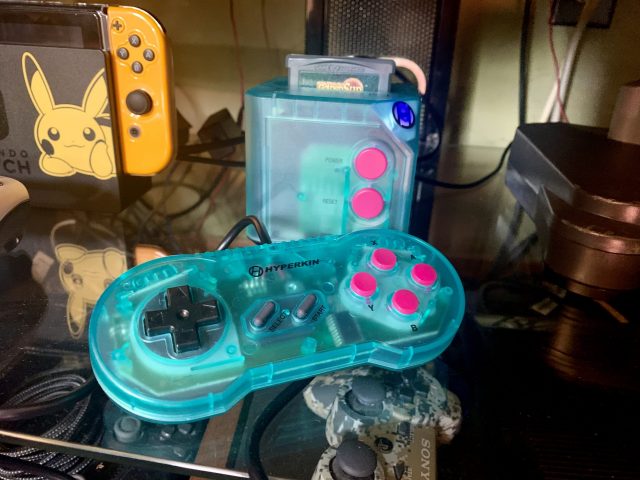 The microSD card that comes with the RetroN Sq serves a couple of purposes. First, it houses the system’s firmware which can be updated via updates by plugging into a PC. Secondly, the RetroN Sq does not play games directly from the cartridge. Instead, the system pulls the game data onto the micro SD card uses emulation to run them. Each cartridge that’s inserted dumps its data onto the microSD upon bootup. While one might think that the relatively small data size of the average Game Boy game would mean this is a rapid process, but sadly the time varies wildly, with some starting very quickly and others taking upwards of a minute. It’s a far cry from the plug-and-play nature of any of the Game Boy line, but none of the wait times were so insufferable that I found myself discouraged from playing. There is one caveat that I must mention: save files are maintained on the microSD card and do not transfer over to the cartridges themselves. Hyperkin has stated this is to help stave off file corruption issues, but it might frustrate those who want to continue playing where they left off once they transfer a cartridge back to a Game Boy device.

What did frustrate me was finding that many of my GB, GBC, and GBA cartridges wouldn’t play on the RetroN Sq. To be clear, the majority of them did work, but there was a sizable number that did not. There didn’t appear to be any rhyme or reason as to why one cartridge would work over another. I would plug in a game, wait for the data to drop, and wait and wait some more, until I’d finally give up and move on to the next cartridge. In fairness, I feel like everyone will have differing levels of success when trying to play their Game Boy collections. Between age and wear, there’s no telling which cartridges will work or not on a given RetroN Sq. Indeed, I have trouble getting some cartridges to fire up even on authentic Game Boy hardware. Still, that so many games just didn’t want to start was a major letdown. 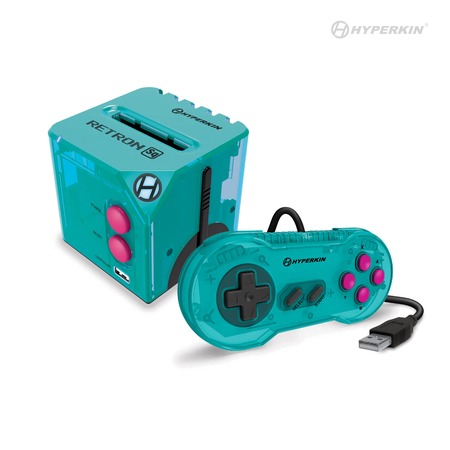 Performance, however, was never an issue for any of the GB and GBC games. The image rendered crisp and clear on the screen and gameplay was smooth. I have an older flat screen TV and found that some of the image was being cut off towards the top and bottom of the picture, but it wasn’t typical and something I think newer TVs might have less of a problem with. Oddly, rather than display GB games in monotone, the RetroN Sq instead elects to display games using a single color palette as would have been available on Super Game Boy or a Game Boy Color. The palette can’t be adjusted, nor removed, which is slightly disappointing. It would have been nice to be able to make adjustments, or at least only have the games display in black and white, but I never found the limitation distracting.

As I write this review, Version 1.2 of the RetroN Sq’s firmware has been available for a few weeks. While GB and GBC games worked fine right out of the box, GBA software lurched on the system (GBA functionality, as the box proclaims, was in beta). The framerate didn’t render games unplayable, but it was far from enjoyable. That’s a thing of the past with Version 1.2. I own a fairly extensive collection of GBA cartridges, and I can attest that every game I got plugged in and working played smoothly. It’s a major improvement that anyone who might have been scared off by early reviews of the RetroN Sq will want to take note of. If there is a remaining irk, it’s arguably that controller compatibility is limited for the RetroN Sq. While its simple USB connection would suggest any number of pads should be able to be hooked up, that isn’t the case. Hyperkin says this might change down the road, and playing devil’s advocate it makes sense that the hardware maker would want to favor its own peripherals, but hopefully future updates rectify this.

All told, the overall experience I’ve had with the RetroN Sq has been very positive. The games look good and play just as well. The included Scout Controller is sturdy and comfortable to hold, especially thanks to the protrusions on the back of the device that give it more grip. Yes, it might be a fight to get all of your games to work on the RetroN Sq, and yes, the data dump can drag on at times, but these are not constant problems—just semi-regular ones. As a means of playing the Game Boy library across all three of its platforms is a wonderful boon to retro gamers and those who might not have a functioning Game Boy left in their possession (or who want to save their working Game Boy from additional wear and tear). Although there are other options available to play Game Boy software on an external screen, most notably Nintendo’s own Game Boy Player for GameCube, none of the options are perfect. Even the Game Boy Player is limited to GBA games (and is currently being hawked for ridiculous prices by scalpers). I wholeheartedly recommend seeking out a RetroN Sq due to its compatibility, ease of use, and great design.