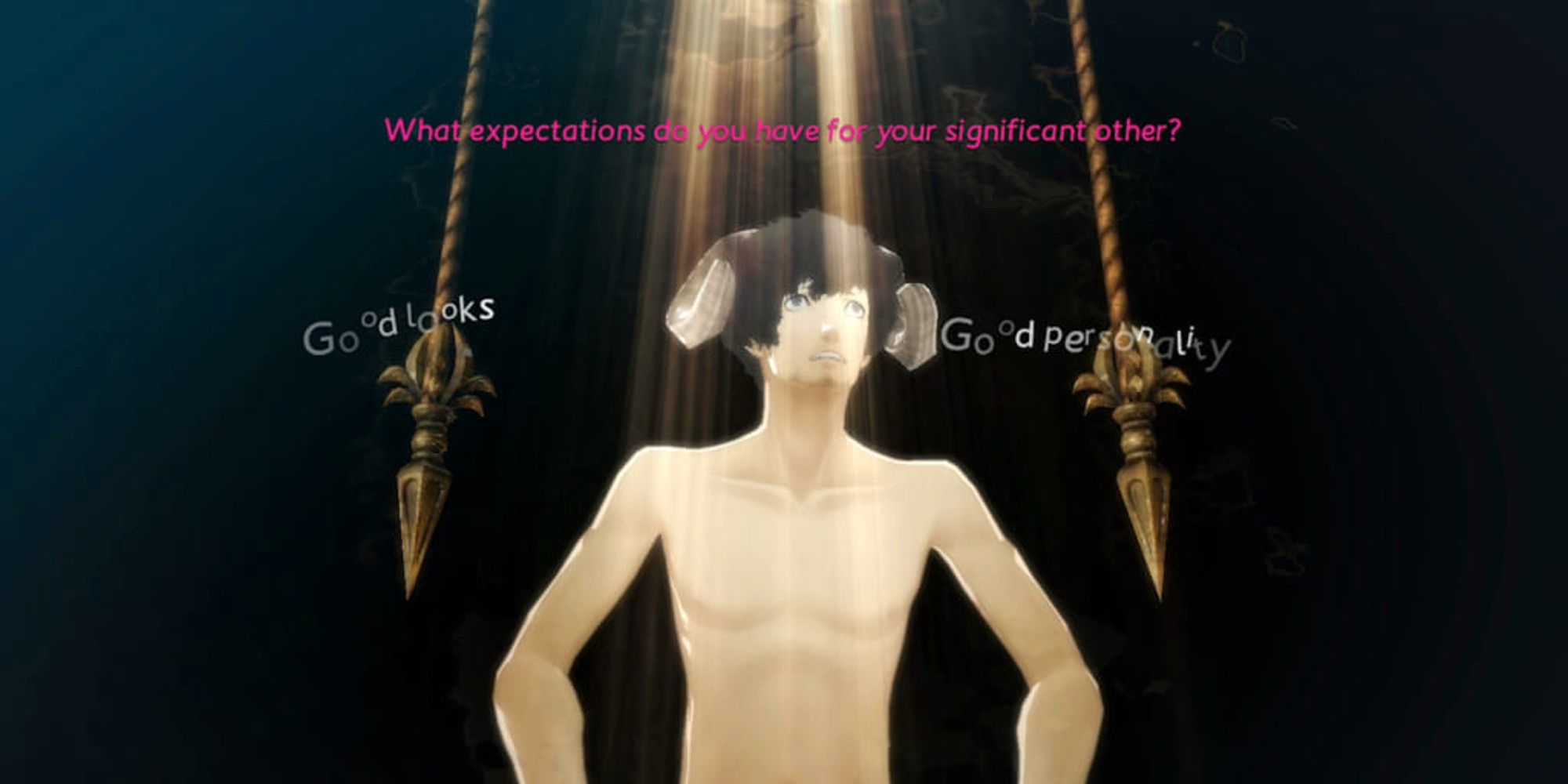 In total, Catherine Full Body has 13 endings. These endings are split between all three love interests, as well as Vincent. As you progress through the game and complete the nightmares each night, you will have a chance to answer several confessional questions which can sway your mysterious meter.

Related: How Long Does It Take To Beat Catherine: Full Body?

When combined, the meter and answers to these confessional questions will determine which ending you will get. In this guide, we are going to go over how to get Vincent’s endings. Vincent has two endings, which do not involve any other love interest. First, let’s take a look at what this means.

What Is A Vincent Ending?

Vincent’s endings are routes that do not involve Catherine, Katherine, or Rin. Also called Freedom endings, they involve Vincent doing something outside of love.

There are two freedom endings possible in the game. For both of these endings, the answers you give for confessional questions in stages 9-2, 9-3, and 9-4 are very important. Similar to both Catherine and Katherine, your answers will determine the outcome of the game.

What Is The Mysterious Meter?

The mysterious meter appears every time Vincent has to make a decision. This includes confessional questions, text messages, and questions asked in person.

The red side of the meter represents freedom, while the blue side represents order. Although a devil and angel can be seen above the meter, it doesn’t fully represent good and evil. Every choice you are presented with will have a clear freedom answer, as well as a clear order answer. For example, if you give in to your desires and cheat on your girlfriend who wants to marry you, your meter will lean into the red side.

This is important to keep in mind from the beginning of the game, regardless of which ending you want. Let’s go over both of the freedom endings below, as well as the stage nine answers required for each.

In this ending, Vincent heads to the Stray Sheep and has a heart-to-heart with Boss. Vincent mentions that he doesn’t want to marry anyone, and instead receives a hefty loan from Boss. Originally, Vincent wants $50,000, which is how much a seat costs in the tourist space program. Boss doesn’t have this much money but loans him all that he can.

The space program isn’t mentioned too often in the game, but a giant space tourism poster can be seen taped to Vincent’s wall. The poster mentions that a ticket costs $80,000, however, later in the game, a couple can be overheard talking about how the price of these tickets has been lowered. In general, this is still a lot of money.

To make up for the cost of the seat, Vincent bets on a female wrestler. Ultimately, he loses the bet along with all the money.

Below, you can find the stage nine confessional answers.

The answer you give for question 9-1 will not influence the ending that you receive.

True Ending: This Road We Walk

This ending is similar to the good ending. Vincent visits Boss at the bar and receives a loan. Rather than losing the bet and all the money, Vincent manages to win.

With this money, Vincent moves out of his apartment and travels into space for the tourist space program. At end of the cutscene, we see Vincent in a large space city, with other spaceships flying by. Overall, this is the healthiest ending. There are no toxic relationships present, and Vincent decides to pursue his ambitions, rather than love.

To get the true ending, the mysterious meter will need to be in the middle. This is the key difference between the two endings because the answers to the stage 9 questions remain the same. The answers to these questions can be found again below. Remember, these are the only correct answers to get a freedom ending! Similar to the good endings, the answer for question 9-1 does not have any impact on the game.

That’s all there is to know about Vincent’s freedom endings. After getting these two endings, try to get the other 11 endings. We have walkthroughs for Rin, Catherine, and Katherine if you get stuck along the way.

Next: Catherine: Full Body – What To Do After Beating The Game