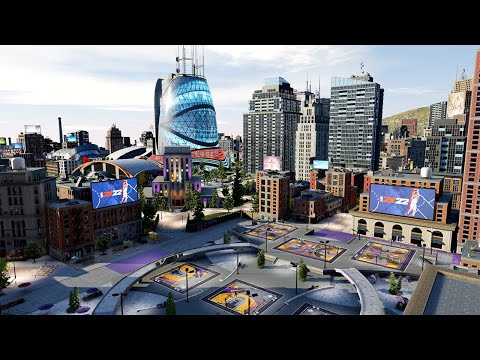 2K has completely revamped the NBA 2K franchise and one of the things to watch out for is The City.

If you haven’t played NBA 2K in a while, you’ll notice a significant improvement over the previous few years, but nothing compared to what’s to come with the new NBA 2K22. Today, 2K detailed in-depth one of the features of the franchise’s new title that is getting many changes.

The City delivers a brand new MyCareer tale with an original quest-driven storyline, cutscenes, and moods that all ballers will adore, along with a thriving basketball community and a range of prizes and activities.

Only available for the PlayStation 5 and Xbox Series X|S, 2K delivers a slew of improvements in this mode of play that take NBA 2K‘s gameplay to a whole new level.

The City, with its more roleplay-oriented method of play, allows us to build our characters in greater detail, allowing us to not only play ball but also live a virtual life while accomplishing missions, jobs, interacting with online pals, and more.

This game mode has the following features:

The Neighborhood is back.

The Neighborhood will also be available on the PlayStation 4, Xbox One, Nintendo Switch, and PC. Set sail on the “Cancha del Mar” this year; from the lobby to the upper deck, each level of the ship is intended to provide a variety of different activities.

Seasons will also introduce intriguing new Excursions set in tropical and recognized locations, with each Season bringing new material, prizes, and engaging activities. NBA 2K22 will be available on the PlayStation 5 and PlayStation 4, Xbox Series X|S and Xbox One, Nintendo Switch, and PC on September 10.