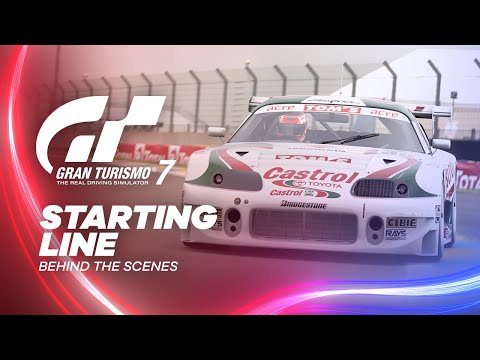 A new trailer for Gran Turismo 7 has been released, ‘The Starting Line’ giving us a behind the scenes view into series creator Kaz Yamauchi talking about what he aims to create with this latest full entry in the series.

However, as he’s talking, there’s plenty of cutaways to racing action, there’s car lists tucked into the background and stylish swoops of light that certainly hint at… something.

Some of these cars are new, some are returning classics, some have been in regular use since Gran Turismo: Sport, some are minor variants. There’s already an impressive looking car list that’s building up, especially with these new additions (via Traxion.gg)

This trio of cars have been seen for the first time in a GT7 trailer:

Also spotted in the background were the following:

But what about the swoops of light that are sprinkled through the trailer? Well, GT fanatic internet sleuths were quick to piece together what they meant. Literally. They literally took screenshots and put the puzzle pieces together to reveal a partial track layout for series’ iconic Deep Forest Raceway. Last seen in Gran Turismo 6 on the PlayStation 3, it’s been in every mainline game except for Gran Turismo: Sport, and would be a welcome return with a new generation of graphical polish.

Gran Turismo 7 is coming out for PS5 and PS4 on 4th March 2022, a surprise cross-generational release considering its original announcement – if you want to upgrade from PS4 to PS5, you’ll be able to pay the $10 difference to do so.