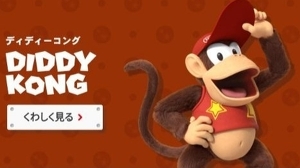 The image of Diddy Kong has been updated on the Japanese Nintendo website, sparking rumours that the pint-sized hero may be making a return in the not-too-distant future.

As spotted by the eagle-eyed BlueCatBanjo73 and reported by our friends at Nintendo Life, Diddy's had a bit of a makeover, even though it's been all quiet on the Kong front since Tropical Freeze was re-released on Nintendo Switch a couple of years back.

Now, however, Nintendo Japan has updated the stock image of Diddy on the official website, switching out the last render – which was taken from Mario Party DS – for a new one. Interestingly, Diddy's sporting the same pose and outfit.