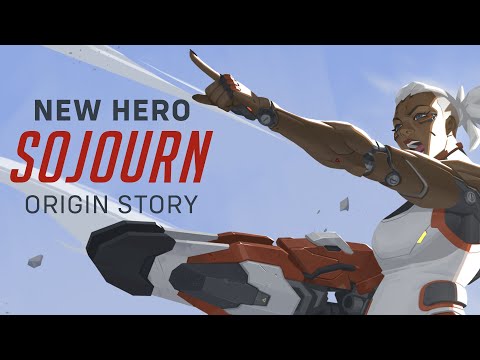 Five years ago a fan wrote to Jeff Kaplan and asked for a hero like her to be added to the game and that wish has finally been fulfilled (with a twist) on the eve of Overwatch 2’s closed beta.

The Overwatch universe is set for a rapid expansion later this year with the release of Overwatch 2. On top of the first game’s impressive 32 hero roster, there are a handful of brand new characters rumored to be arriving on release as well.

The only confirmed new addition to the game is Sojourn, a Railgun-wielding, wall riding DPS unit that aims to shake things up a little bit. While her penetration damage represents something new in terms of gameplay, her identity is also breaking barriers for OW.

As both the first black woman and the first Canadian she’s already racking up accolades for diversity, and there’s a good reason for that.

Jeff Kaplan named Sojourn after a fan of Overwatch

While we’ve known her callsign for several years now, it was only in her origin story that we learned her birth name is Vivian Chase.

This may seem like a very minor detail from the outside, but on the interior of the game, the name Vivian is a close one to Kaplan’s heart.

As reported by Kotaku in 2017, a fan by the name of Vivian Phillips sent the head honcho a personalized letter in hopes of getting his attention.

In that address, she details her experience as a black woman who enjoys video games: “I can only name three Black females that’ve been leads in a video game: Clementine from [The Walking Dead], Nilin from Remember Me, and Rochelle from Left 4 Dead.”

This letter drew an eventual response from the top dog as he replied with a letter of his own apologizing for not taking a harder stance to get things right: “I will share your inspiration with my team,” Kaplan said.

“We will keep working hard to do a good job. Forgive us when we make mistakes, for hopefully, our intentions have proven to be good.”

There’s also a more obvious reference happening in the character’s identity, as the nickname Sojourn is no doubt a nod to the 19th-century abolitionist and human rights activist Sojourner Truth.

While he may not be in charge of the game anymore, this is just one more way the Kap’s presence is still being felt ahead of the release of Overwatch 2.