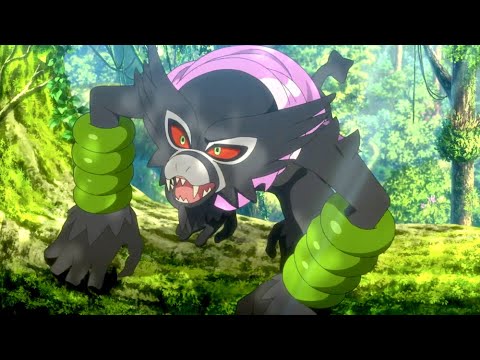 2021 continues to be a great year for Pokemon fans as the franchise celebrates its 25th anniversary, now including the latest Pokemon the Movie: Secrets of the Jungle arriving on Netflix this October a few months after its Japanese release.

Secrets of the Jungle was originally scheduled to premiere in Japan during the summer of 2020, that is until the pandemic struck and it was subsequently pushed to December last year. That made the release coincide with download codes for the mythical Pokemon star Zarude making their way over to Western shores, just as Pokemon Sword and Shield’s Crown of Thundra expansion was still somewhat fresh with the new 8th Generation Pokemon that came with it.

Naturally, that was because the Dark/Grass Zarude is the star of the show in Secrets of the Jungle, where the Pokemon’s talking Dada form adopts a boy named Koko in the mysterious Forest of Okoya near the anime-exclusive Milyfa Town that fans will get to see on Netflix starting October 8. Of course, Ash and Pikachu venture near the natural landmark as part of their next adventure only to find out that the forest is being threatened by an Avatar-like environmental disaster that endangers the lives of the Flygon, Flapple, Pangoro, Drilbur, and Skwovet that inhabit it.

There are tons of familiar faces around as Team Rocket’s Jessie, James, Meowth, and Wobbuffet have also been transferred in as guaranteed comedic relief. While clearly Secrets of the Jungle seems to draw a ton of inspiration from The Jungle Book, the movie has received heavily positive reviews that point to it being one of the better Pokemon films out there.

Pokemon the Movie: Secrets of the Jungle will follow up Netflix’s wildly successful streaming release of Mewtwo Strikes Back—Evolution last year, after the new CGI-style remake of the first film became 2020’s most-watched anime for the company. However, even those who prefer to get their Pokemon fix in video game form have a lot to be excited about considering the new remakes are edging closer to their November release date, even if Pokemon Brilliant Diamond and Shining Pearl's Pokedex falls short of expectations.

With New Pokemon Snap's update still keeping trainers busy for now, there’s a lot of time to kill and even more Pokemon left to catch until Legends: Arceus brings its potentially revolutionary gameplay onto the Nintendo Switch next year. So kick back and enjoy Pokemon: Secrets of the Jungle this fall.

Pokemon the Movie: Secrets of the Jungle will be available on Netflix starting October 8, 2021.