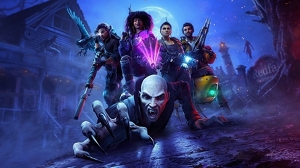 The Bethesda and Xbox showcase ended with a twist this evening, with the announcement of a brand-new game from Dishonored and Prey developer Arkane Studios.

Titled Redfall, the game is an open-world co-op shooter arriving in summer 2022. It's being developed by Arkane Austin, and judging by the trailer, it looks like it will feature… well, a lot of vampires and shooting.

While we don't yet know exactly what the gameplay will look like, it will feature co-op with up to four players. "Redfall blends single and multiplayer options seamlessly, allowing the player to venture into the darkness alone or to squad-up with up to three friends for four-player co-op", a Bethesda press release explained. "Teammates can try different hero loadouts and combine their strengths to overcome the vampire legion and their brood of maniacal followers."