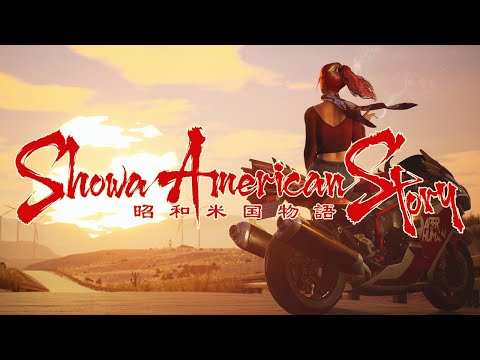 The studio had started teasing the game a few days ago with a website and a rather cryptic trailer. Today, we finally get to see what it is about with a reveal trailer.

Here’s how the developer describes the game.

Showa American Story is a brand new RPG and an enthusiastic love letter to the 80s’ pop culture that features a strong taste of B-Movie.

Players will play as Choko, a teenage girl miraculously revived from the dead, and embark on a journey of truth and revenge across the United States, the country under Japanese “Cultural Colonization” long before a mysterious catastrophic incident changes the whole world drastically, while meeting different people, overcoming difficulties and trying to live a better life in this long post-apocalyptic adventure.

Showa American Story is set in the year “Showa 66,” which is a fictional year. It means the 66th year of the reign of Emperor Hirohito (which in the real world ended in Showa 64), which would equate to 1981.

As mentioned above, it’s a single-player JRPG for PS4, PS5, and PC.

If you’re unfamiliar with Nekcom (which is a contraction of “NEKo’s COMpany”), it’s an indie developer based in Wuhan, China, and founded in 2011.

It’s known primarily for the “Dying” horror franchise, from which we saw Dying: Sinner Escape Portable for mobile in 2013 and Dying: Reborn for PS4 and PS Vita in 2017 (followed in 2019 by a Switch port), on top of Galaxy Aircraft for iOS and Android in 2015.

The studio is also currently working on Dying: 1983 for PS5 and PC.