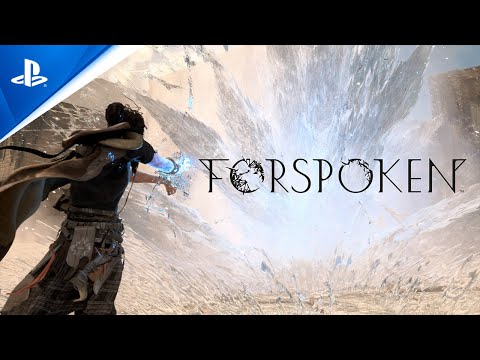 Square Enix have revealed a brand new trailer for Forspoken during the PlayStation Showcase. The trailer shows a young girl living in our modern world who gets transported from New York City to a Final Fantasy style magical land. There’s a swearing and it and attempt at comedy, so it’s quite different to a Final Fantasy game.

The hero, Frey Holland, is accompanied by a talking bracelet called Cuff. We can’t quite place who is doing the voice work but it sounds very familiar, certainly very British. The land is called Athia and described as “beautiful and cruel.” In search of a way home, Frey will battle monstrous creatures, confront the powerful Tantas, and uncover secrets that awaken something much more from within.

First teased during the PlayStation 5 gameplay reveal in June last year, and then in March this year Square Enix changed the name from Project Athia to its new title. The game is in development at newly established Luminous Productions,

Frey will be played by Ella Balinska, who’s best known for her role Jane Kano in the 2019 Charlie’s Angels movie. She said, ““As the first video game I’ve worked on, and growing up a huge fan of video games myself, it’s remarkable to see the incredible world and story of Forspoken come together, blurring the lines between reality and fantasy. Frey as a character is real, she’s raw, she’s a girl who lost her way—both figuratively and literally—and is a character I immediately connected with, as I feel many people around the world will too when they set off on this adventure.”

Forspoken promised to make “full use” of all that the PS5 has to offer, though it’s not quite clear what that means just yet. At its original announcement, it was suspected that it could be a pure PS5 exclusive, thus tapping into the SSD of the console for the creation of its world. It might still make use of the SSD’s ultra-speedy loading, but it will be interesting to see how the game’s minimum requirements are set on PC. We can certainly expect that game to make use of the DualSense controller’s haptics and triggers, as well as the Tempest AudioTech Engine for spatial audio.