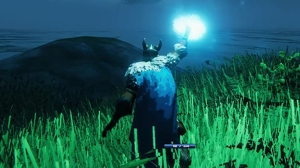 Ok, so you’ve beaten Eitkthyr and a bunch of the other bosses – and you may be wondering if there’s any point in going back to revisit them. In the vanilla game there’s little reason to do so, as you won’t gain any new rewards. But as ever… there’s a mod for that.

Skyheim is a magic mod for Valheim that introduces a bunch of new spells and abilities to spice up combat, all neatly tied into the game’s progression system. Each boss will drop items that can be used to craft rune spells, so you’ll need to repeat boss fights to gather sufficient resources to craft them all. Here’s a video showing off a couple of the spells, and what the crafting process looks like:

The style of spells available in the mod reminded me quite a bit of the basic spells in Skyrim, and and I’m assuming the “Sky” in the mod name is probably a nod to the Elder Scrolls game. Although I imagine most people will immediately reach for the fireball spell, it’s worth noting this mod adds plenty of helpful spells that aren’t directly related to combat. The Light spell allows you to summon a glowing orb to illuminate the way, Travel increases your movement speed, and there’s an area of effect healing spell to help both you and your buddies. There’s even a Recall spell to call in the Valkyries to teleport the player back to spawn – the equivalent of Gandalf calling in the eagles, I suppose.