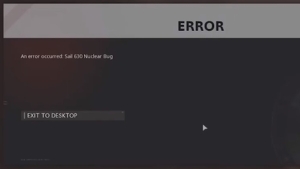 Last week, Eurogamer reported on how Call of Duty: Black Ops Cold War players were terrified of getting banned for playing Zombies to high rounds after a spate of high-profile ban reports from those who proclaimed their innocence.

The Zombies community surfaced a disconnect message called “Sail 630 nuclear bug”, which popped up on the PC version of Treyarch’s shooter.