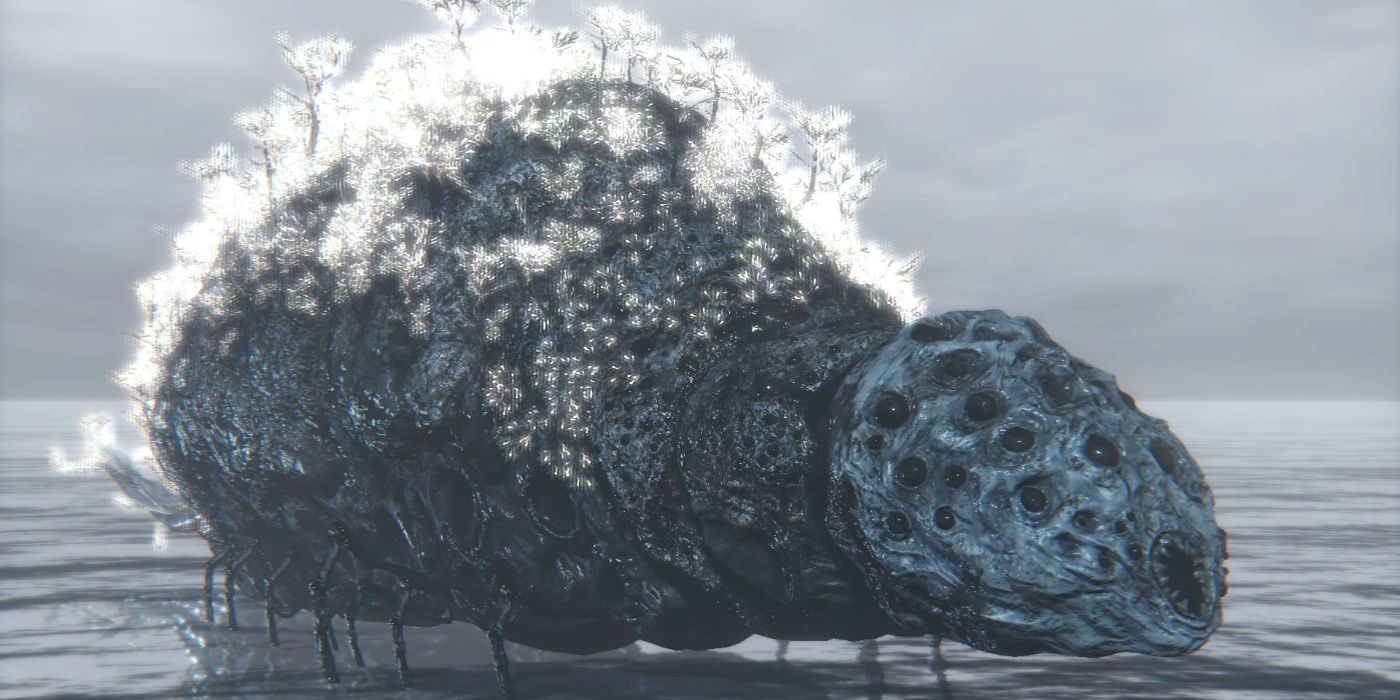 The Soulsborne series has a reputation for challenging bosses. From Ornstein & Smough to the Nameless King, FromSoftware’s main foes have never been easy. 2015’s hit title Bloodborne continues this trend with a roster of titanic eldritch foes.

Among a family of world-class enemies, fans expect narrative depth, interesting gameplay, and raw memorability. Some bosses each meet those criteria and represent not only the best enemies in Bloodborne but also some of developer FromSoftware’s best work to date.

In-game lore suggests that Rom was once a student of Byrgenwerth’s Master Willem who managed to transcend to the status of a Great One. Narratively, Rom represents the structural midpoint of the game, after which the unseen terrors plaguing Yharnam become visible to the player. Unfortunately, the rich lore surrounding this boss cannot overcome less-than-memorable gameplay.

Protected by a swam of minor spider enemies, the boss herself is slow with an easily-telegraphed set of moves. Though Rom’s fight features several stages, they are remarkably similar to one another. Still, as Bloodborne’s first boss fight that probes the many layers of the game’s reality, Rom is a notable character in the game’s rich cast of foes.

Like Rom, the Celestial Emissary is not a particularly challenging battle but one which is both memorable and adds meaningful depth to Bloodborne’s gameplay.This easy boss, like the Deacons of the Deep in Dark Souls III, is first represented by a swarm of minor enemies – the cartoonish mushroom-headed Celestial Minions.

Keen-eyed players will notice that there is one such minion who does not attack the player throughout the fight. Bring this foe to half health and it will transform into the true boss — a legitimate Great One of towering stature with a cluster of tentacles emerging from its head. Even players who haven’t invested in strength builds should be able to dispose of this boss easily, but its surprising appearance and lore-rich background make the Celestial Emissary one of the better bosses in the game.

Depending on the path a hunter takes through Bloodborne’s main campaign, Mergo’s Wet Nurse may be the final boss of the game. At the top of the tower in the Nightmare of Mensis, this nimble, six-armed figured guards and gives life to Mergo, a newborn Great One who threatens Yharnam.

RELATED: 10 Games To Check Out For Fans Still Waiting For Bloodborne PC Port

Most notable is this boss’s second stage, in which it makes multiple copies of itself to swarm the player. It’s a gameplay mechanic FromSoftware fans will no doubt recall from prior games, but it is never executed so menacingly as with this teleporting, semi-invisible boss.

Only the most intrepid and investigative hunters will even encounter this foe. The game’s true final boss, the Moon Presence can only be fought after defeating Gehrman, the First Hunter. Even then, it will only manifest itself if the player has consumed three of four eldritch umbilical cords that can be found during the game’s final act. In terms of gameplay mechanics, this makes the Moon Presence a hybrid second stage of the battle with the old hunter, a unique narrative design choice rarely seen even in Soulsborne games.

A triumph of visual aesthetics, the Moon Presence elegantly walks a fine line between the grotesque and otherworldly beauty, drawing from the game’s Lovecraftian tradition while adding Hidetaka Miyazaki’s signature polish. It’s a grueling fight not to be missed by true fans of the series.

According to lore, Logarius was an Executioner of the Healing Church sworn to purge Yharnam of the Vileblood lineage. To this end, he still stands guard outside Queen Annalise’s chambers atop Cainhurst Castle, ready to forcibly dissuade any who would seek an audience with her. Though this boss is wholly optional and most casual players will never reach him, his fight is among Bloodborne’s most cinematic battles. Set on the castle’s roof amidst a blistering snowstorm, the wizened Logarius glides around the arena firing homing spells and slashing with a glowing red scythe.

Between the boss’s spells and the gothic environs, the fight effortlessly recalls the darker moments of the Harry Potter franchise, laden with all the punishing difficulty fans have come to expect from a FromSoftware title. Felling this intimidating foe will also allow players to wield Logarius’ Wheel, one of Bloodborne’s best weapons.

Upon reaching 20 points of Insight or defeating Rom, hunters will be able to see the unseen entities plaguing Yharnam, most notably the colossal spider-legged Great Ones known as Amygdalas. Of all the enemies in Bloodborne, none draws as much inspiration from the canon of H.P. Lovecraft as these monsters. Though they are, with notable exceptions, passive elements of the environment when they appear, the most determined hunters can square off against one of them in the Nightmare Frontier or Chalice Dungeons.

The boss battle is difficult and features a dynamic second stage in which the creature rips its own arms off to use as weapons. Not only does this unexpected development make the fight more challenging, but it also foreshadows the inclusion of the Amygdalan Arm trick weapon in The Old Hunters DLC.

4 Ebrietas, Daughter Of The Cosmos

Hidden deep in the recess of the Healing Church, Ebrietas is a Great One first contacted through rituals conducted with artifacts from the Pthumerian Chalice dungeons. This beast is widely considered one of the hardest boss fights in Bloodborne, as Ebrietas employs a diverse range of attacks from spell-casting to tentacle whipping when fighting the hunter.

Though other bosses evoke the popular tentacled monsters of Lovecraft’s work, Ebrietas takes this to a new level with a skin-crawling design that resembles a mass of primordial organs, tendrils, and tubes. Enshrouded in lore and mystery, this optional boss is not to be missed in any hardcore hunter’s playthrough.

For many hunters, Father Gascoigne will be the first boss of the game. The plagued priest resides in one of Yharnam’s graveyards, driven mad by bloodlust, and will attack any hunters who approach. The battle is divided into three stages, the first featuring Gascoigne as a normal hunter, the second with him utilizing his trick weapon’s second form, and the third where he transforms completely into a frenzied werewolf.

Players who obtain the Tiny Music Box from Gascoigne’s daughter, for example, can use this item to stun him before he transforms. This degree of design renders Father Gascoigne one of the more nuanced boss fights in the game, despite appearing so early in the campaign.

The penultimate boss of The Old Hunters DLC, Lady Maria is easily one of the most challenging bosses in Bloodborne, representing a cross between Artorias from Dark Souls and the ultra-challenging Bloody Crow of Cainhurst NPC from Eileen’s questline. She was one of Gehrman’s first students, and players can learn that she is the likeness upon which he based the Doll in the Hunter’s Dream.

Another denizen of Cainhurst, Lady Maria is related to the Vileblood line and even utilizes high-damage Bloodtinge weapons during the battle. Her story is profoundly complex, even by FromSoftware’s standards, and represents a triumphant synergy of narrative design and gameplay mechanics the should not be missed by any die-hard fan.

Players of Bloodborne’s main campaign will hear Ludwig’s name mentioned several times, but they will not meet him until The Old Hunters DLC. A beastly hunter of the Healing Church, Ludwig is best described as a hybrid of Kin and Beast, featuring a chimeric body and a second head filled with eyes capable of spewing toxic paleblood at the player.

The fight also showcases Hidetaka Miyazaki’s cinematic mastery as a director. The first and second stages flow together as naturally as a Hollywood film, and the change adds meaningful aesthetic and gameplay changes to the fight. Here, the beast regains some of his humanity and stands upright, dextrously wielding a glowing greatsword. It’s even possible to revisit this boss after the fight and speak to his severed head. Those players who do so while wearing the attire of the Healing Church can obtain Ludwig’s Holy Moonlight blade, a fan-favorite weapon featured across the Soulsborne games.

NEXT: 10 Items In Bloodborne You Shouldn’t Miss