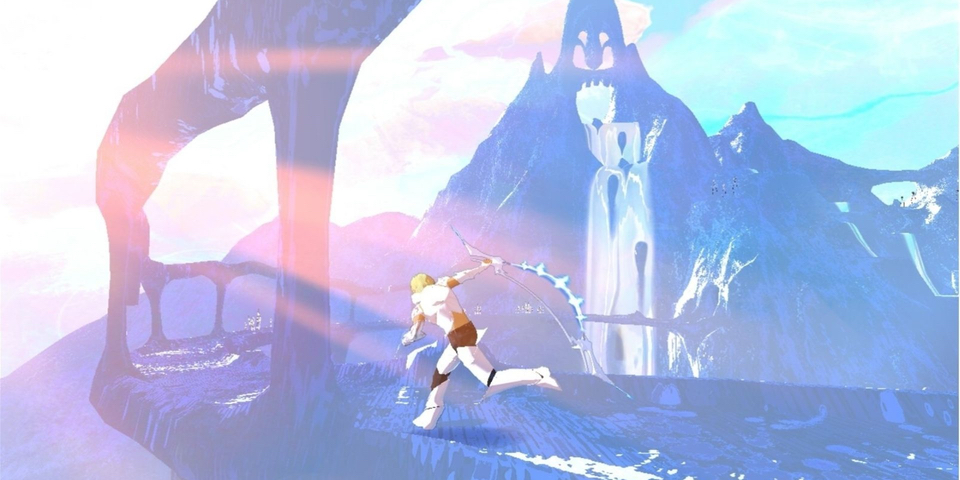 Even by cult classic standards, El Shaddai: Ascension of the Metatron is perhaps the cultiest of cult classics. Originally released in 2011, it was developed by UTV Ignition Games – a studio made up of a surprising number of Capcom veterans – but despite boasting senior talent from Devil May Cry, Ōkami and Viewtiful Joe, the studio only ever made this one single game. Director Sawaki Takeyasu then founded Crim Inc. and went out of his way to obtain the rights to El Shaddai in 2013. Now, 8 years later, he’s given his trippy religiously-inspired action-adventure a new lease on life with a PC port.

While I doubt a modern release will turn this into a breakout hit or spark feverish conversation, it at least gives die-hard fans and curious PC gamers an easier way to experience one of the most artistically overwhelming and stylish action games of the last decade.

Japanese developers love to pull from all forms of religious cultures and canon for narrative inspiration – the massive Shin Megami Tensei series being the most notable example of the link between Japanese video games and global religion. Even with that in mind, the hyper-specific inspiration behind El Shaddai is definitely an unexpected pick. The game is based heavily on the apocrypha of Judeo-Christian mythology. Specifically, it’s a spin on the ancient Hebrew apocalyptic religious text the Book of Enoch. You play as the titular biblical hero Enoch, tasked with hunting down seven fallen angels who have taken over Earth and begun spreading their own selfish teachings.

While there are obviously characters and story elements drawn from this deep and dense source material, you shouldn’t fall into the trap of expecting a traditional narrative from this game. Don’t expect a great one, either. Every cutscene in El Shaddai feels like something out of a dream. Characters speak as if you’ve just stumbled into the middle of a conversation you have no context for and story beats sometimes get immediately repeated, bizarrely shuffled around, or vaguely sped through. The nonsensical presentation of the story adds to the charm of the game, though. El Shaddai is totally a “vibe” game, with each of these incongruous cutscenes contributing to the bizarre yet addictive atmosphere.

It’s a shame that the gameplay doesn’t take similarly artistic liberties. Combat and traversal in El Shaddai isn’t particularly inventive or unorthodox, it’s just kind of okay. Despite the veteran action-game staff that worked on this game, combat strays in the opposite direction of Bayonetta and Devil May Cry; your arena-combat arsenal consists of few buttons, a handful of attacks, and just three different weapons.

The weapons and how you acquire them are the only impressively unique element of the package. The Arch is a glowing blue saw-blade, while the Gale is a punchy ranged weapon and the Veil is a more literally punchy weapon fuelled by twin-fist attacks. You obtain your weapons on the fly by stunning enemies that are carrying them long enough to snatch them for yourself. Prioritize grabbing the Arch, though, as it’s easily the most enjoyable of the three.

The biggest problem with combat in El Shaddai is simply that it never changes. The battles you experience in opening hour are the same as you will encounter six or twelve hours in. With no weapon upgrades to find or additional attacks to unlock and the same 3 enemy types assaulting you endlessly, combat is a major drag unless you drop the difficulty and breeze through each encounter. There is so much variety in the style and aesthetic of El Shaddai, yet the gameplay is flat and monotonous. One chapter of the game sees you riding a high-speed motorcycle through a sleek sci-fi city in a massively refreshing change of pace, but it’s the only time the game mixes things up. If each chapter delivered a similar style of expectation-shattering shift in gameplay, I think El Shaddai could have been a truly great game.

Truthfully, the gameplay never was and never will be the highlight of El Shaddai. That honour instead belongs to the game’s aesthetics. Each level looks entirely different from the last, with wild colours flooding every environment and otherworldly structures lining the periphery. Despite being a decade old, it all holds up magnificently thanks to the painterly style that the art direction sought to emulate. It’s worth suffering through the mindlessly repetitive combat just to see what beautiful environment the game throws at you next, and what jaw-dropping choral music accompanies it.

One last note: the PC release of El Shaddai is a shockingly bare-bones port. Launching the game greets you with an archaic launcher window, and a checkbox in this window will open up an even more archaic Windows GUI box for you to adjust the game settings. There aren’t even that many graphical settings to adjust, either. Despite how long it’s been since the original release, this port doesn’t feel like it’s truly at home on PC.