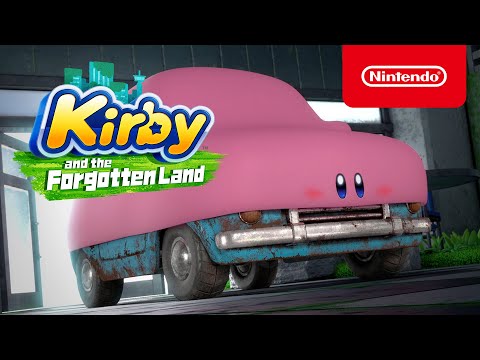 Nintendo’s little pink platformer has his Breath Of The Wild moment but is The Forgotten Land really the best Kirby game ever?

It’ll seem peculiar at first, but the other game you’re going to constantly hear about in connection with Kirby And The Forgotten Land is Elden Ring. Not because the games have anything in common in terms of gameplay but because they exist at opposite ends of the difficulty spectrum, with many arguing that Elden Ring is too hard and that the Kirby games are too easy. However, what’s clear from playing both franchises recently is that this is not a problem for either game.

Elden Ring’s astounding financial success seems to instantly put an end to arguments that its difficulty is off-putting for the majority and, while it’s never been nearly as popular in Europe, the Kirby franchise has been highly successful for exactly 30 years now. A lot of the standard 2D platformer entries do tend to blur into one another, but this is the mainline series’ first foray into 3D and it’s easily one of the best ever.

When we say 3D we’re not talking some expansive open world adventure but a much more constrained experience, somewhat in the style of Super Mario 3D World. The restrictions this brings means the gameplay is still very similar to the older titles, and that includes traditional flaws such as being too short and just a tad too repetitive. It balances this out though with one key feature: two-player co-op.

Apart from the low difficulty, the other common criticism aimed at the Kirby games is that that they feature a more saccharine style of cuteness than other Nintendo games, with none of the self-awareness of Super Mario or visual inventiveness of the Yoshi games. That’s still true of The Forgotten Land but its setting is not the generic looking Planet Popstar that most of Kirby’s adventures take place on but… a post apocalyptic wasteland.

There are no sun-blasted skeletons or mutated cockroaches, but the decaying shopping centres and other buildings are oddly reminiscent of The Last Of Us and other post-human landscapes. Although it only comes right at the end of the game, there is a more coherent explanation for what’s going on than you’d initially expect but for the majority of the game it’s really just a minor detail, especially as the overall theme of the levels still fit into the usual pattern of desert world, ice world, lava world, etc.

What also hasn’t changed is that Kirby is the most overpowered protagonist in video game history. Forget Doomguy or Kratos, as Kirby would, literally, eat them for breakfast. This is not an exaggeration in any way, given his ability to swallow the souls of his enemies (well, that’s what it looks like) and steal their special powers. So, for example, if Kirby swallows an enemy shooting fireballs he too gains that ability.

There’s a wide range of these special powers, including bombs you can throw, a sword (with a Link style hat), ice breath, a giant hammer, a gun with aiming lock-on, and the ability to turn into a sea urchin style ball of pins and roll up enemies like a katamari. This is already far more than is needed to tackle the hapless enemies you come across, but The Forgotten Land also allows you to upgrade the abilities – by collecting hidden blueprints and rare resources – which makes them even more preposterously powerful.

Once again, you can’t help but wonder whether Kirby is really the bad guy, especially given he can also float for a considerable distance and The Forgotten Land introduces a second new ability to absorb larger objects. These are things that are too big for Kirby to swallow and so instead he ends up stretched over the outside like a condom. The objects are usually mundane, like a railing arch or a metal gear, but can, respectively, be used to fly through the sky in short Star Fox style sequences or blow a blast of wind that can vaporise enemies or act as a sail for a boat.

As well as a rusted-out car there’s also a drinks machine that fires cans like bullets, a traffic cone that acts as a giant drill bit, and a set of stairs that can be used to squash enemies or reach secret areas. There are secrets in The Forgotten Land but, as you’d expect, they’re not that hard to find, although secret rooms containing either blueprints or more of Kirby’s Waddle Dee friends can be quite substantial.

In terms of actual platforming the game is, as you might guess, not very difficult, with the glide ability allowing you to rise up back to any platform you fall off of. Since the pseudo isometric camera has only limited movement the angles and distances are always easy to judge and mechanically this is a perfectly solid platform adventure.

The depth of field effect is a bit overused, but it’s otherwise a pretty attractive one too. Although for some reason this is the biggest difference we’ve seen between how nice a game looks on a TV compared to portable mode. Admittedly we were using the OLED model but the combination of vibrant colours and slightly cartoonish visuals looks even better on the small screen.

Complaints that Kirby games are too easy are not a question of snobbishness but a warning for those that haven’t played one of them before and might not know what to expect. The first time we ever died, outside of failing an optional timed course, was during the final boss, so it’s not a stealth brag to say the game is very easy.

Even if the idea of an easy game appeals, The Forgotten Lands tends to repeat ideas and mini-bosses more frequently than other Nintendo platformers, so while being easy wouldn’t be so bad if you were constantly being presented with new sights and new ideas that’s not necessarily the case. It’s not a dealbreaker, but for such a relatively short game it’s certainly a notable issue.

Traditionally, Kirby level design also tends to feel a lot more disjointed and random than other top tier platformers, with little obvious connection between one area and the next even within the same level. Thanks to the new graphics this is much less of a problem with The Forgotten Lands, although the inability to backtrack means stages still never feel like a single free-flowing location.

The Forgotten Lands is perfectly entertaining on your own, with a neat little town hub that builds up as you rescue more Waddle Dees and they set-up various mini-games to act as palette cleansers to the main levels. There’s also a colosseum mode where you can replay previous fights and take on extra characters that we won’t spoil here but which any Kirby fan will instantly be able to guess at.

However, as ever, everything is much more fun with another person.

The other player has to take the role of a Waddle Dee with a spear, not another Kirby (whatever Kirby is), but playing together, in a similar manner to the Lego games, quickly washes away most of the concerns about repetition and a lack of challenge – especially as chaperoning a less experienced player is a skill all in itself. There’s no split screen, so the other player gets dragged along by whoever’s playing as Kirby, but it works very well and can be played on just a single Joy-Con each.

The Forgotten Land isn’t suddenly going to make the franchise a favourite of hardcore gamers, but it is a welcome reinvention of the formula that should appeal to a wider audience than ever before. If it proves a success it’s difficult to say what the future of the little pink blob might be but he’s clearly getting more powerful, and more popular, all the time.

In Short: One of the best Kirby games ever made and while the formula hasn’t changed as much as it first seems it’s also one of the most enjoyable co-op titles of recent years.

Pros: As overpowered as he may be Kirby is a lot of fun to control and his many and varied abilities are very imaginative. Nice visuals and great co-op options.

Cons: The low difficulty magnifies problems with repetition and a lack of flow to the level design. Quite short and predictably less fun on your own.

MORE : Kirby And The Forgotten Land is a 3D post-apocalyptic game that doesn’t suck

MORE : Fortnite has Kirby cameo in new trailer, censored by Sony and Microsoft