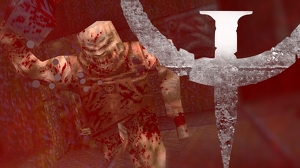 Exactly five years ago, Digital Foundry Retro was born! At the time, it was an experiment more than anything else, focusing on just one version of id software's Quake – the astonishing Sega Saturn version, built from scratch by Lobotomy Software. It was the port that John Carmack reckoned couldn't exist, but somehow a talented team found a way. A half-decade on from the release of that video, DF Retro returns to Quake, this time covering it in its entirety: the game, the technology, the ports and the legacy.

Quake itself began as nothing more than a mention in some text blurb in Commander Keen, but even then, there were hints of a game that exceeded the technological limits of the hardware of the time. Building on the mega success of Doom, the first time gamers got to experience Quake was in the release of QTest in early 1996 – a Deathmatch test with three supplied maps. What was obvious was how demanding the game was. Id Software debuted with a software renderer that tapped into the strengths of Intel Pentium processors, running like a slideshow on older 486s and non-Intel processors.

The shareware episode launched in June 1996, with the full game arriving a month later. With its dimly lit corridors, abstract geometry and industrial soundscape, Quake certainly delivered something special. It was a deeply atmospheric, fast paced action game. Quake features vast, complex levels showcasing 3D graphics unlike anything the market had seen before. It builds on the artistic influences which served as a foundation in Doom while introducing dark industrial and Lovecraftian themes. It's chaotic but it works. The technology was phenomenal, but gameplay is king. In the years that followed, games would attempt to push interactive narratives and expand design possibilities but few remain as engaging as Quake.