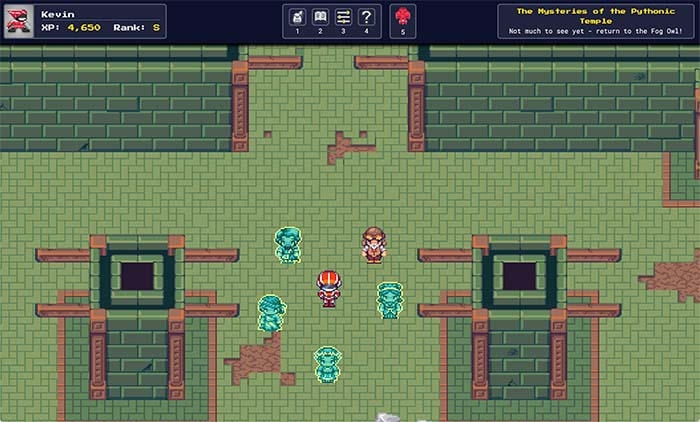 Learn to Code Without All the Frustration

Computer programming can be incredibly daunting to get into in this day and age. Impossibly complex programs have become standard in the industry, and learning can be a frustrating, time-consuming and expensive commitment. Fortunately, there are alternative options.

Starting in 2013, Twilio released their gamified tutor TwilioQuest. Now releasing version 3.2, it’s easier than ever to learn programming in a fun but not dumbed-down way. TwilioQuest begins with an intro cinematic that explains the adventure you are yet to embark on and starts off teaching you JavaScript and Python. Each of these real-life languages features a fantastical premise behind them, such as the Pythonic Temple which is supposed to be the last surviving structure of the “Ancient City of Python.” Adding this mystical and playful element to programming undoubtedly increases motivation to learn to program. It’s the same as playing any other game, and the skills you pick up directly translate into a skill you can use for work or play.

The gameplay consists of Zelda-like RPG elements and simple yet charming graphics. The environments are pretty simple tile-based isometric locations but are all distinct. My favourite is the JavaScript Test Lab, which is a space station similar to that of 2017’s Prey. Every action in the game is carried out by a line of code. For example, you might encounter a door that is locked because of a code malfunction. To open the door, you have to write a line of code that allows the door to complete a mathematical operation. The problems get harder to solve as the game progresses, and you have to actually solve problems logically and combine all the programming knowledge you gained.

TwilioQuest is a brilliant idea that more people need to be exposed to. Learning to code in a fun and rewarding manner makes that information so much more meaningful. If you’re more interested in seeing what other people code, check this out! What do you think about TwilioQuest? Do you think it would be an effective way to learn? Have you heard of it before? Let us know in the comments below!

The post SNES Style Game Teaches You to Code appeared first on COGconnected.