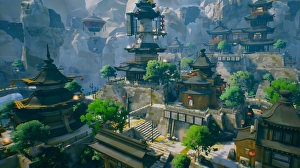 I stumbled into Tasomachi: Behind the Twilight after 30 more-or-less consecutive hours of Outriders, a game of ceaseless killing and looting. Mopping the guts from my face and shaking flattened bullets from my coat, I peered woozily at the opening shot of an airship trundling down the seashore and all but burst into tears.

If you're looking for an attractive 3D fantasy world that doesn't require a moment-to-moment tithe of blood, this is your game. The work of Tokyo-based indie nocras with a score from Youtube star Ujico*, it's essentially an idle afternoon or two in the daydreaming mind of a seasoned triple-A artist, whose credits include Zelda and Final Fantasy – a distillation of lessons learned while composing geography and architecture for grander, more combative experiences. It's explicitly designed to be low-key, with no threats, no player death and no major goals beyond collecting things – an action it invests with a quiet intimacy that gently overpowers the element of repetition. It is the thinking behind A Short Hike applied to one of the towns from Breath of the Wild.

Integral to Tasomachi's charm is that it's inconsequential. You play Yukumo, a nimble and usefully fall-damage-proof girl with a big hat, whose airship crashlands in the town of To-en during a trip along the coast. To-en, you soon learn, has succumbed to a mysterious magical fog. One of the resident cat-people advises you that to fix up your ship, you'll need to lift this curse by gathering lanterns called Sources of Earth and seeking the blessing of Sacred Trees.