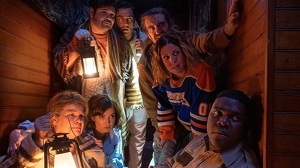 Throw another one onto the teetering pile of video game adaptations; while Netflix is busy animating the likes of Castlevania and DOTA, and Sony fires out movies based on Uncharted and Monster Hunter – not to mention Paramount’s attempts with Sonic the Hedgehog or Warner Bros’ live-action Mortal Kombat film – Ubisoft is bringing its social deduction game Werewolves Within to the big screen, an endeavour that’s just received its first trailer.

Werewolves Within, in its original guise, is a hidden roles and social deduction game where, at its simplest, a group of tries to determine which players are villagers and which are werewolves. It’s a VR reworking of the classic party game Werewolf (also known as Mafia) and, as such, perhaps isn’t what you might call an obvious candidate for a movie adaptation.

Ubisoft and partner IFC Films clearly believe otherwise, however, and has turned the property into a whodunnit-style comedy horror helmed by Josh Ruben (director of Scare Me) and written by Mishna Wolff (I’m Down). Gone is the video game’s medieval setting, replaced by a modern day tale in which the residents of small town Beaverfield are trapped in an inn together during a snowstorm while a mysterious creature picks them off one by one.