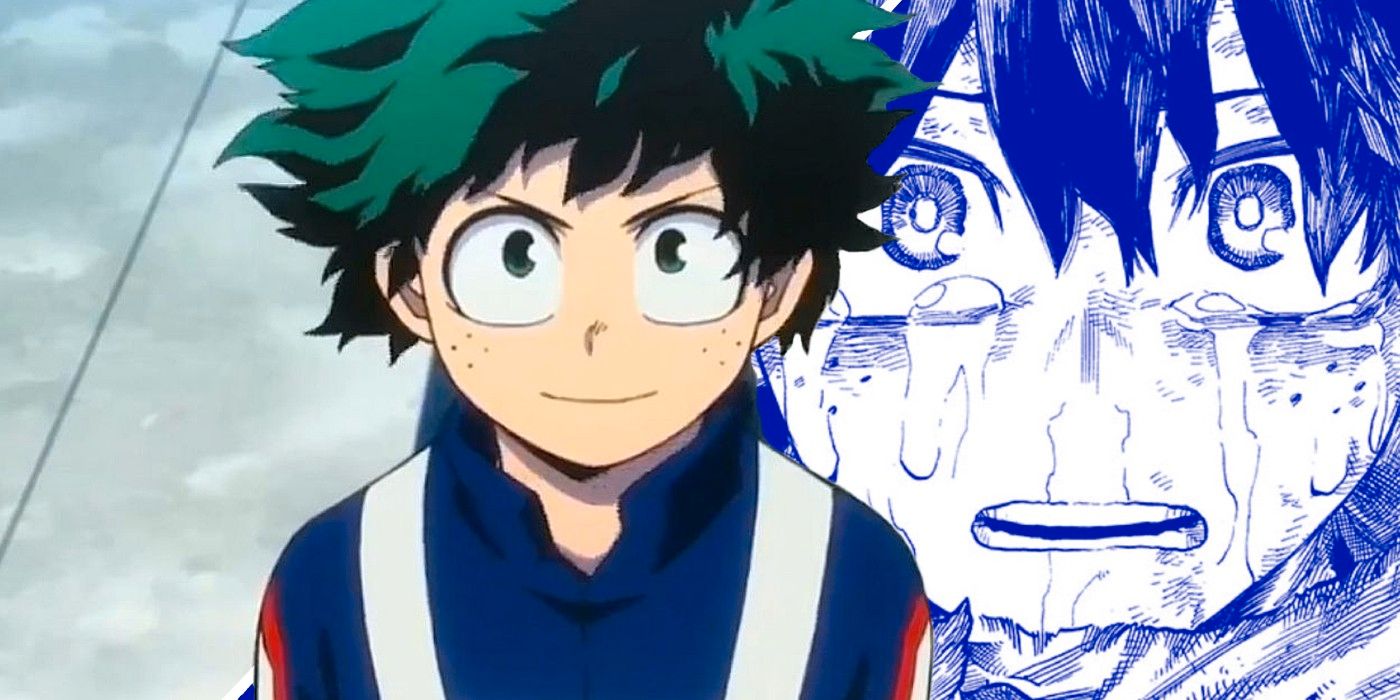 Chapter 325 of Kohei Horikoshi’s My Hero Academia takes a moment to echo the manga’s very first chapter, offering fans some perspective on just how far these characters have come.

After a stint as a loner vigilante, Deku finally relented and returned to U.A. with his classmates, but what they found when they arrived wasn’t exactly the warm homecoming everyone had dreamed of. With disillusioned civilians using the school as an emergency shelter, the public recognized Deku and tried to throw him out, fearing that he might draw the attention of villains if he stayed too long. While his classmates, particularly Ochako Uraraka, advocated for him, things still weren’t looking good. At last chapter’s end, two characters who had personally seen Deku’s heroism in action took a stand alongside him. In 325, another civilian joins them in advocating for Deku, speaking for quite a long time, and he has a surprisingly familiar face.

In the beginning of My Hero Academia, Midoriya pauses on the street to watch several pro heroes, including Mount Lady and Kamui Woods, attempt to stop a villain with a shark-like body and a transformation quirk. As Midoriya stands in the crowd taking notes, a man nearby acknowledges his interest and wishes him the best. This man has a very unusual hairstyle, however – and it’s the exact same as Deku’s latest advocate in 325. Whether this man remembers his encounter with Midoriya from just over a year ago isn’t made clear, but regardless, it draws a direct comparison to the fawning behavior of the crowds towards heroes in the first chapter and their treatment of Deku and the others now. While a lot of people have lost faith, hope hasn’t been given up entirely, and the crowd begins to realize that if things are ever to return to normal, they’ll no longer be able to sit on the sidelines and watch as fans.

While this unnamed character’s return is the most notable callback to the first chapter, it’s far from the only one. The large shark woman who comes to Deku’s defense bears some resemblance to the aforementioned first villain, and the bigotry aimed at her in her previous appearance seems to stem from a fear that anyone who looks like her must be a villain. Both scenes also see meta references to characters being drawn in a wildly different art style: All Might in the first chapter, and Deku here. A focal point in both is how badly injured and in need of rest the hero is, with All Might’s injury being revealed to Midoriya in the first chapter, and Deku’s exhaustion and injuries pointed out for all to see. All Might hid his suffering so as to be seen as a symbol rather than a man, but that approach is a part of what brought the world to the edge of ruin. The people relied on a hero that they saw as almost a god, not a person like each of them. Uraraka’s reminder that Deku is just a boy, a high schooler who has not even graduated yet, provides a wake-up call to many in the crowd. There’s nothing wrong with looking up to a hero, but it’s just as important to remember that they are as human as anyone else.

With the manga said to be in the final stretches of its story, it’s only natural for Horikoshi to look back at how it all began, and it’s a mark of how well written the series is that these references don’t feel shoehorned in. Now that the public is back on Deku‘s side, he will be able to rest and regroup for an offensive against the villains, with both his friends and the confidence of the people behind him in future chapters of My Hero Academia.

Next: My Hero Academia’s U.A. High is Actually a Giant Robot