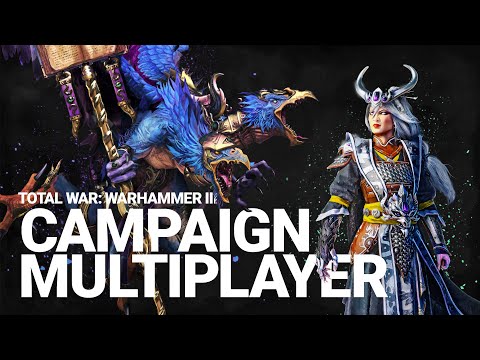 Creative Assembly complete their Warhammer trilogy with a trip to the Realms of Chaos and what may be the best Total War game so far.

Video games weren’t the only industry to benefit from people being stuck indoors during lockdown. Lego saw a major increase in demand and so did board games and tabletop role-players. All three hobbies have a lot of crossover (as evidenced by the new Lego Horizon Forbidden West set) and with Warhammer being the king of wargaming there have been dozens upon dozens of game tie-ins over the decades. And yet this one is undoubtedly the best.

There’s a couple of slight caveats to that, in that we’re talking about the fantasy-based Warhammer universe here, not the sci-fi Warhammer 40,000 – where the Dawn Of War series still has plenty of fans. Warhammer 3 also has things somewhat easy in that it’s following up on two other excellent games, although this final entry certainly isn’t resting on any laurels.

It would be easy to assume that this was little more than a standalone expansion but that grossly underestimates not only the amount of effort that has gone into Warhammer 3, but how different it is to its predecessors. As well as adding new locations and armies it also makes notable changes to the gameplay and structure, in what is not only one of the best Total War titles but one of the best strategy games of any kind.

If you’re already familiar with Total War games such as Three Kingdoms and Troy then you’ll know they’re turn-based strategy games which use real-time battles to resolve combat. The actual Warhammer is, of course, turn-based so this is by no means a one-to-one recreation of the tabletop experience, but British developer Creative Assembly has a clear love for the universe and all the many factions and units still feel extremely authentic, in terms of both visuals and abilities.

It’s always been the stated goal of the Warhammer Total War games, that once the last one is released all of the content, from all three games, would be available in one giant sized campaign. That won’t be an option at launch (although the combo for Warhammer 1 and 2 is already available) but if you do own the existing games you can add in the races that are unique to them, so that you have the option to play as any of them in multiplayer battles.

Even if you don’t know anything about Warhammer specifically, the Tolkien-esque setting makes it easy to imagine the basics, with the first Total War game focusing on humans, dwarves, and orcs. Warhammer 2 added elves, as well as more obscure factions such as Lizardmen and the rat-like Skaven. The third game adds human civilisations based on Imperial China and Medieval Russia (the Grand Cathay and Kislev, respectively), as well as ogres if you buy the game within the first week of its release. The most significant new addition though is the Chaos Gods.

The mythology of Warhammer has four Chaos Gods – called Khorne, Tzeentch, Nurgle, and Slaanesh – and they’re all bizarrely horrible in different ways. Warhammer, and indeed anything from creators Games Workshop, is always unashamedly over-the-top in its aesthetic and lore, and one of the most impressive things about Warhammer 3 is how much the game leans into this, with lots of features and options that would never be found in a more straightlaced strategy game.

Even the original 2016 Warhammer game seems relatively staid compared to the madness of Warhammer 3, but all three titles still have the same basic set-up, interpreting the world of Warhammer in the context of a Total War game. As such, the basic structure of the game is the same as any other Total War game, where you organise your settlements and armies in a Civilization style, turn-based meta game, before taking direct control of your troops on the battlefield.

Warhammer 2 and 3 have built upon this foundation by adding more role-playing style elements, where characters can be upgraded and customised like a standard role-playing or MOBA character. However, unlike a standard Total War game, or indeed most strategy games, your main goal in Warhammer 3 is not necessarily to conquer the world but to reach a Kislev bear god called Ursun, who has been captured by the satanic Be’lakor and shot with a magic bullet that has led to him opening up a series of two-way portals to the Realms of Chaos.

What you want to do with Ursun depends on which faction you take control of, with the Kislev trying to free him and others attempting to steal his power. Obviously, taking over the world does help, but the portals can open up anywhere and travelling into them with your armies gives you the chance to take on a Chaos God and steal their soul, and once you’ve got all four you can decide what to do with Ursun.

Creative Assembly could’ve simply added in the new factions and called it a day but given how much effort they put into making Warhammer 2 feel unique it was clear that was never going to be the case. Not only are the new factions interestingly unique but the four separate Chaos Realm areas are all impressively distinct, from the poison-filled realm of Nurgle, where your troops take constant damage just by being there, to the randomised floating islands of Tzeentch,

It’s not just a gimmick either as the portals create a lot of very distinct strategic considerations, from how much of your army you leave behind in the mortal realm, to guard your corporeal possessions, to whether you try and steal souls from another faction once they’ve got them – potentially bypassing the whole Chaos Realm problem entirely.

The game’s filled with lots of other unexpected details though, including a fifth Chaos faction lead by a corrupted Kislev prince – who’s the one that shot Ursun with the cursed bullet. If you choose to play as him you’ll find that you’re able to customise him with not only new weapons but also new limbs. We’re not sure if that’s an established thing in Warhammer but it’s not only amusingly bizarre but almost turns his campaign into a full-on role-playing game.

Not every idea is entirely successful, with the odd Tower Defense style survival battles being a bit too simplistic for a game that already has highly organised sieges. The diplomacy options also don’t really make much sense when there’s an interdimensional Armageddon going on, but the game still manages to make the best of it, with a new outpost option allowing you to open a joint base where you can recruit troops from your allies’ army.

What’s also impressive is that while you’d expect us to be saying that it might be best to start with the first game if you’re new to Total War, Warhammer 3 has by far the best tutorial of the series – so actually you can dive straight in no matter your level of experience. We would definitely recommend getting all three though, because that all-in-one campaign is going to be great and there’s a ton of other extra content promised after launch.

When exactly Creative Assembly will stick a fork in Total War: Warhammer and say it’s done we’re not sure, but the three games combined are already a fantastic achievement, not just for Total War and Warhammer but strategy games in general.

In Short: An inspired ending to the Warhammer trilogy that rather than just adding new factions makes a host of clever additions and changes to the gameplay and structure, in what is one of the great achievements in modern strategy gaming.

Pros: The new factions are great fun and highly distinctive, with the Realms of Chaos inspiring a number of welcome new features, both big and small. Surprisingly accessible, with even more content to come.

Cons: The artificial intelligence is as imperfect as ever and the survival battles are a touch simplistic.

MORE : Henry Cavill has got his own official character in new Total War: Warhammer 2 DLC