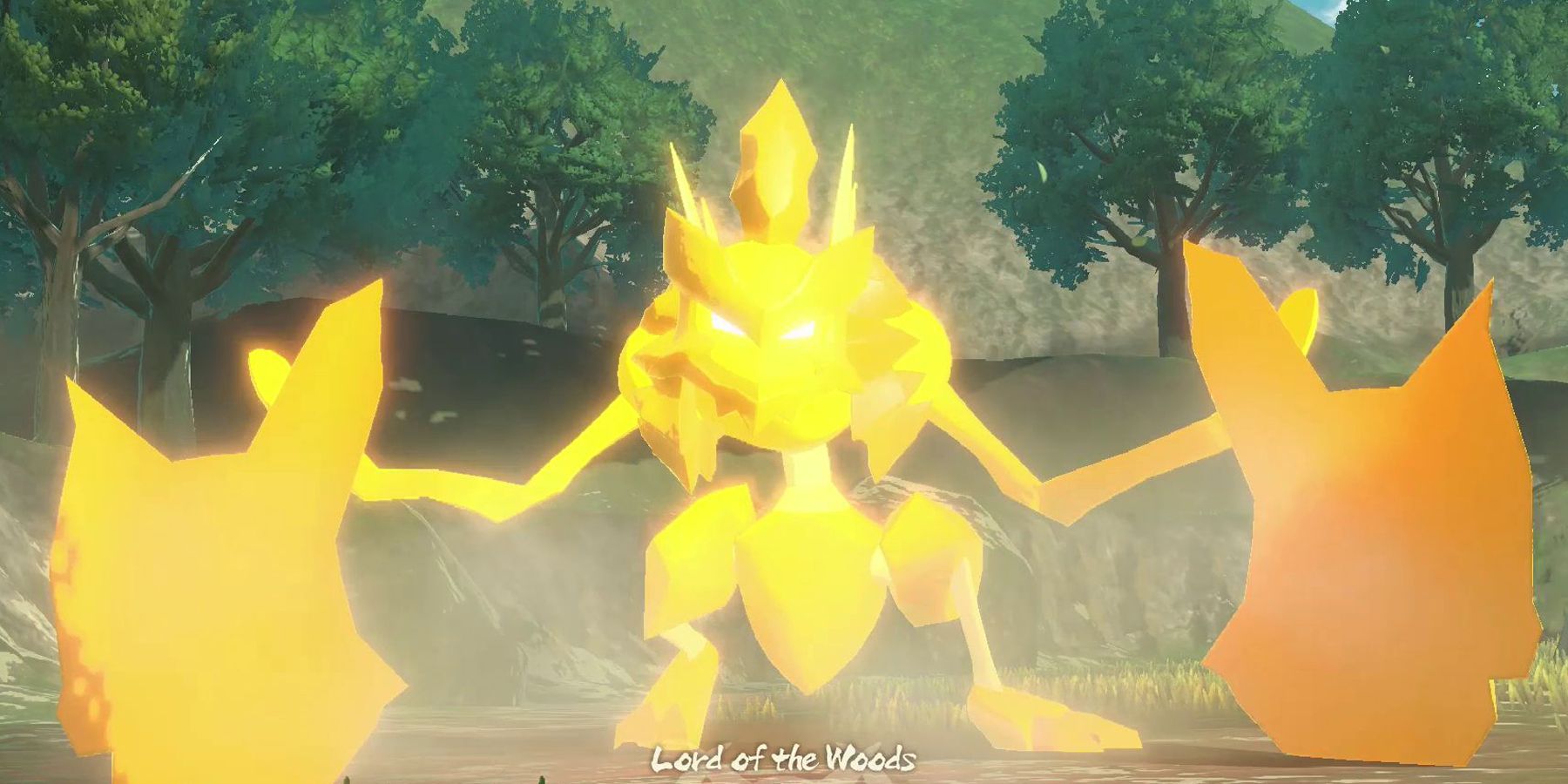 Like most Pokemon games, Pokemon Legends: Arceus will introduce some new monsters to the world, while featuring some fan-favorites from the Sinnoh region. In the most recent gameplay trailer, players got a closer look at some of those new Pokemon and the role they’ll play in Pokemon Legends: Arceus‘ story. There will likely be more new Pokemon revealed as the game gets closer to its release date, but the Noble Pokemon already stand out.

The Pokemon Legends: Arceus trailer revealed Noble Pokemon, a special class that will impact the story. The only confirmed Noble Pokemon is Kleavor, a new evolution of Scyther that’s known as the “Lord of the Woods.” However, the Wardens who protect special Pokemon are also confirmed to care for Wyrdeer, an evolution of Stantler; and Basculegion, an evolution of Basculin. It’s probably safe to assume these two are Noble Pokemon as well, especially given the Legends Arceus website features Wyrdeer under its Noble Pokemon discussion. In addition to them, there will likely be several more introduced for Pokemon Legends: Arceus that play a significant role in the story and gameplay.

Noble Pokemon Are A New Class

Noble Pokemon are making their debut in Pokemon Legends: Arceus, and there’s still quite a bit that players don’t know. They’ve only just been revealed, and their powers are pretty mysterious overall. However, that’s part of the point. According to the recently revealed lore, Noble Pokemon are special because they are blessed with mysterious powers. They are protected by Wardens, who ensure they have the space to use their powers for the good of the Hisui region.

What those powers indicate are unclear, but given the game is named after Arceus, the god of Pokemon and the creator of the universe, it seems probable that the Noble Pokemon were chosen by Arceus to be guardians of Hisui. They could be vital to maintaining balance in the region, which might be why Noble Pokemons require protection from Wardens.

However, the Arceus story appears to involve a phenomenon that’s causing the Noble Pokemon to become frenzied. To have such powerful Pokemon out of control is dangerous for humans and Pokemon alike, so the player has to come in to help calm them down (and probably catch them afterward). Trainers can also ride some Pokemon in Arceus, which seems to extend to Noble Pokemon assuming that Wyrdeer and Basculegion are part of the Noble roster.

Based on what’s been seen so far, Noble Pokemon have a lot in common with Legendary Pokemon. However, they aren’t quite as fantastical or elusive. The biggest similarity is that, like Legendary or Mythical Pokemon, there’s only one. Players will probably be able to find other Pokemon of the same types in the wild. Kleavor is a new evolution of Scyther, so it’s likely that Scyther will appear in the wild even if it might not evolve into a second Kleavor. The exact rules are unknown. However, even if the same type of Pokemon exist in the wild, they won’t have the skills of the Noble Pokemon.

Like Legendaries, Noble Pokemon have powers that are unique. However, they’re unlikely to be so powerful that they can manipulate things like space and time. The Noble Pokemons’ powers are being kept under wraps for now, but they likely have something to do with maintaining the balance of nature. Pokemon Legends: Arceus is set in an ancient Sinnoh Region when nature was everywhere and settlements were few and far between.

There aren’t any Noble Pokemon in later titles set in the Sinnoh region, so for the lore to stay consistent there must be something that caused the Noble Pokemon to no longer exist. That reason could be anything from the world finally becoming the way Arceus wanted it, to humans developing the land more.

The Function of Noble Pokemon in Pokemon Legends: Arceus

Because Pokemon Legends: Arceus takes place in a time where there aren’t any Gym Leaders or Pokemon training tournaments, Arceus needs to be structured differently than most Pokemongames. Instead of going from Gym to Gym and challenging their Leaders to become the Pokemon champion, the player is a member of the Galaxy Expedition Team studying Pokemon. They have rudimentary Pokeballs and aren’t competitively motivated.

The exact mechanics aren’t clear, but the system has already been compared to Pokemon Sun and Moon, which featured Trial Captains and Totem Pokemon. The Captains would challenge the player to accomplish a series of tasks before being deemed worthy to face the Totem Pokemon. This is probably how things will work in Arceus. The Wardens protecting the Noble Pokemon will probably ask players to prove themselves or meet certain benchmarks before they can interact with the Noble Pokemon.

Combat itself is also very different with the Noble Pokemon. Rather than challenging a Gym Leader and their six Pokemon, players battle the Pokemon itself in an effort to calm it down. The combat looks more dynamic than anything that’s been done in a Pokemon game before, and is moving away from the traditional turn-based format.

Players still use their Pokemon and their skills to fight, but it’s a more fluid system that brings the trainer to the battle too. Trainers will need to dodge attacks and subdue the Pokemon with special materials. Because of their significance to the story and gameplay, Noble Pokemon should have a huge role in making Pokemon Legends: Arceus the fresh take on the series that fans have been waiting for.

Pokemon Legends: Arceus will release for Nintendo Switch on January 28, 2022.

MORE: Pokemon Battling May Never Be the Same After Pokemon Legends: Arceus